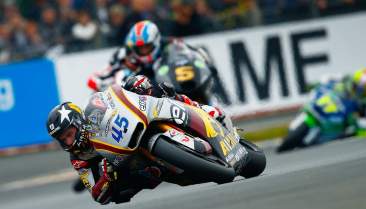 Bike Social-supported Moto2 rider Scott Redding became the first Britain in 30 years to stand on the top step of the podium at Le Mans after the 20-year old won the fourth round of the 2013 Moto2 World Championship.

After the race he spoke to Bike Social saying: "To take my first Moto2 win gives me a big confidence booster, I'm so happy that it was at the team's home Grand Prix."

The race was stopped on the 24th of the 26-lap race although the conditions had been cold and damp all morning.

"There were spots of rain throughout the whole race but they got bigger and bigger so with about 5 laps to go I put my hand up to let them (Race Control) know and they put the red flags out soon after," he explains.

The MarcVDS rider now sits on top of the Championship, 24 points clear with key rivals Esteve Rabat and Pol Espargaro sliding out of contention in synchronised fashion early in the race.

"I saw them both slide off and knew that the most important thing was to get as many points as possible, I had a couple of moments at that corner but the marshals had oil flags out which was weird," said Redding.

On the slippery side of the grid and after a near jump start, our man had slipped back to ninth position by the first corner but Scott found a rhythm and on three successive laps made a late-braking manoeuvre into the left hander at the Dunlop chicane stick.

"I'd been strong at that part of the circuit all weekend and even last year but I managed to make the moves and they worked," he continued. "The guys at the front were pushing hard at the start but I knew it was a long race in those conditions so I took my time.  I knew I was faster than the guys in front so didn't need to rush."

Eventually he got past Johann Zarco and into the lead on lap eight and never looked back. "I managed to control the gap between myself and the guys behind but when you're in the lead and the rain comes it's not the guy in the lead who has the advantage because the guys behind can see that if I got through the corner then there's enough grip there," he says.

Commenting on the unorthodox end of the race when the red flags were shown with only a handful of laps remaining, Redding said: "It was a bit like the end of a practise session when the flags came out and even though I knew I'd won, the emotion came when I got back to parc ferme and saw the guys' faces."

The Championship leader will spend some down-time in the South of France and Italy before the next round at Mugello at the end of the month.