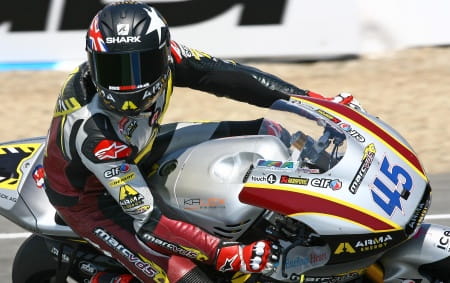 MarcVDS Moto2 rider Scott Redding is set to switch two wheels for four this weekend at Spa Francorchamps. The 20 year old Brit will take to the Belgian track in a BMW M3 GT4 usually used for taxi rides at rounds of the DTM.

Double Moto2 race winner Redding will first receive expert tuition from experienced driver coach, Martin Scheiff before heading out to take on the famous Spa Francorchamps circuit on his own.

“BMW Motorsport very kindly gave me the opportunity to drive the BMW M3 GT4 at Spa and there was no way I was going to pass up a chance like that,” commented Redding. “To be honest I’m a bit nervous about the whole thing. The car weighs next to nothing and produces around 420BHP, so it’s a bit different to the Caddy van I normally knock about in. But it’s not just the car; the track has something of a reputation too.”

“I visited the track for the 1000km of Spa a few years ago, when our car team were racing there, but I’ve never actually ridden the circuit myself. At seven kilometres it’s longer than any track we race on, so learning my way around will be the first priority. Learning a track doesn’t take me that long on a bike, but I suspect it will be a bit harder behind the wheel of a car, as the lines will be completely different and the car itself is about ten times wider than my Moto2 bike.”

“I saw the Marc VDS cars going through there at speed a few years ago and I remember thinking then, ‘that looks a bit scary’, but I suspect it’s going to look a lot more scary from the seat of the BMW M3 GT4 at 200 km/h! The fact that every time I mention to someone that I’m driving at Spa they suck their teeth and whisper ‘Le Raidillon’ hasn’t done much for my nerves, either!”

“I know Martin Scheiff, who’ll be my instructor at the event, so I’ll be in safe hands, but that doesn’t make it any less daunting. Having said that, I’m really looking forward to it and I can’t wait to get out there and give it a go at the wheel of a full on GT4 car.”

Scott will return to two wheeled action next Thursday at Assen.