Redding on 2014: “a realistic target is to be the first production bike”

Fresh from securing 2nd place in the Moto2 World Championship, Scott Redding, complete with his broken wrist and badly bruised back have been back in action getting his first taste of the MotoGP machine he’ll be racing in 2014. 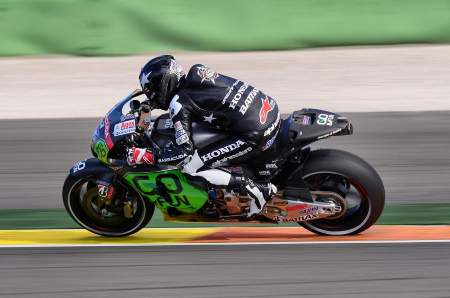 Before Monday’s official test at Valencia, Redding hadn’t even seen the Gresini Honda team’s RCV1000R (also known as a ‘Production Racer’) and had only met his new teams’ engineers once but he’s already focused on the challenge ahead.

Bike Social caught up with the 20 year old before the test and he was clearly concerned about the pain from his recent accidents in Australia and Japan:

“I’m excited about riding the new bike but as I’m not 100% body fit it’s also a little disappointing, I want to get out and do some short runs to see how the bike works and how my body was affected from the race yesterday (Sunday).  It got a real battering, when I got off the bike my back was in so much pain I couldn’t sit or bend but I’ll have some physio and see how we get on.”

“I’ve only met the guys once but they’ve got an Italian style you know, quite chilled.  I will show the spirit to fight and even though it’s too early to set objectives, I think a realistic target is to be first of the production racers.”

After the test this week, Redding will attempt to recuperate from his injuries but will continue to dedicate himself to his own training plan:

"I train myself, it gives myself motivation to be the best.  In my opinion if you need someone to shout at you then you’re not motivated to make yourself the best.
I was really frustrated after Japan when I couldn’t move.  My new regime will have to be something special and it’s something that I’m working on.  I will take a holiday but I will still train, if I’m not training then I feel like I’m losing against my competitors.  I'll mix it up with some track days and some supermoto probably.”

Scott will also spend some of the winter period trying to learn Italian! Ciao.