Redding: "I want to be fighting for the championship from race one" 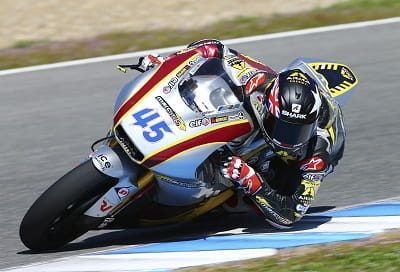 Read Scott Redding's blog exclusively on Bike Social!
The Moto2 ace will be reporting back after every race. Here, he looks forward to the first round of Moto2 at Qatar.

Well pre-season testing is done and dusted for the year and the next time I see the bike will be in the pit box in Qatar, ahead of the first race of the new season.

I’m pretty happy with where we’re at performance wise. In Jerez I rediscovered my confidence in the wet and, in the dry, I was able to run in the top five quite comfortably without feeling the need to go all out for a fast lap time, which I may well have done in the past.

This is an important season for me. I want to be up there and fighting for the championship from race one. Last year we started the season looking for top five finishes, which we achieved, but this year we’re looking to win races and be in the battle for the championship.

The pressure is on but, weirdly, the run up to this season has been more relaxed that any other. Instead of staying in the UK over winter I headed out to Spain, where I was training on the MX and Supermoto bikes almost everyday. It was good preparation for the season ahead, and it put the fun back into riding bikes for me. It was still hard training, but it was a different way of training than I’m used to.

As a result, I think I arrived for pre-season testing far fresher than I have done in the past, and I was certainly more relaxed, feeling none of the pressure you usually associate with the start of a new season.

From the first test I had a really good feeling with the 2013 Kalex. It’s not so different to last year’s bike, which meant we were able to hit the ground running, but there are definite improvements. In the wet, for example, the new bike instils confidence. Last year we had problems in damp conditions, but this year those problems have been eliminated.

As for the competiton, I’m under no illusions as to how close fought this season is going to be. Pol Espargaro has already shown how fast he can be, as have Julian Simon and Nico Terol, while I’m sure Tom Luthi will be strong once he returns from injury. It’s going to be a tough year, as always, but I’m looking forward to it. The aim now is to get a good start to the year with a strong result in Qatar, which we can build on for the rest of the season.

Redding's next report will be straight after the first race at Qatar, read it exclusively on Bike Social!
From all at Bike Social and Bennetts, good luck mate!