Redding falls foul of long back straight at Aragon 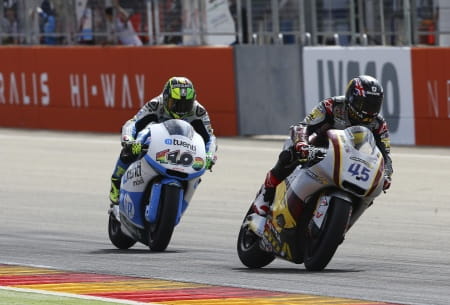 Bike-Social backed Scott Redding set himself a massive task for today’s race in Aragon after he qualified in 13th place. However, the championship leader didn’t hold back, by the first corner he’d progressed to sixth place and fought his way to second place within just a few laps.

“It just sort of flowed, I made a good start and had a good turn one” Redding told Bike Social after the race. “Every space I saw, I made a move so it came from that really.”

It looked as though Redding was heading into dangerous territory as Pons rider Esteve Rabat began to battle with the British hopeful, would the Spaniard attempt to slow Redding up so team mate and Redding’s championship rival, Pol Espargaro could catch up? After a few laps of swapping positions, Rabat managed to secure third place from Redding and began to build a gap.

The Marc VDS Moto2 squad had been struggling with poor rear grip throughout the weekend at Aragon, hence the reason for Scott’s lower than usual qualification. A few changes in warm up brought a slight solution, allowing Redding to challenge in the race.

“We made a big change during warm up which helped a bit and gave me some more confidence with the rear. In the race I could work with that and improve from there.

Espargaro upped the pace towards the end of the race, catching Scott towards the final laps. A sensational battle ensued between the two fighting tooth and nail for the championship. Espargaro passed Redding down the back straight on the penultimate lap and there was no way back for the Brit on the last lap and not for the lack of trying.

After fighting so hard throughout the race, Redding was disappointed with the result.

“It was a little disheartening, to work so hard throughout the race” said Redding. “Pol only beat me in the battle today because of the back straight. He passed me there twice. I was losing two tenths down the straight without a slipstream so I was struggling because of that but I really tried.” 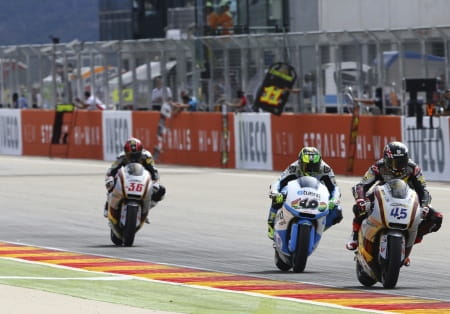 Following today’s race, Redding’s lead in the championship has been reduced to twenty points. Keen to look on the bright side, Scott acknowledges it could have been a lot worse.

“In the end we only lost three points. Going into the race a lot of people thought we could have been losing a lot more than that so it was good to come out with some strong points today after our problems in qualifying”.

Fighting from thirteenth to battle for third was an incredibly strong ride from Scott and what many won’t realise is he was doing so with staples in his arm following an operation last week. He went under the knife in an attempt to fix an arm-pump problem he’s been having in recent races.

“My arm was alright today, it wasn’t quite 100% but it was an improvement and we’ve got to work with it. It’s still quite swollen and the staples are still in at the moment so we need to give it some time to settle down and then we can see if it improves any more”.

“I’m feeling pretty confident now. I’ve sort of settled down a bit and found something with the bike and hopefully going to Malaysia we can keep the momentum from the first practice instead of just race day. We need to try and get back on the podium and stay in front of Pol [Espargaro] and do the best we can.”

Scott’s head is firmly screwed on in terms of what improvements need to be made in order for a successful final push for the championship.

“We need to work on grip as on some surfaces we are struggling. Hopefully we can take the changes we made in warm up this weekend and continue in that direction and find some consistency.”

There are four races remaining in the 2013 championship and with things as close as they are between Redding and Espargaro, nobody would be surprised to see this one go to the wire in Valencia.