Redding: "Mega start to the season"

Speaking exclusively to Bike Social straight after his epic race-long battle for victory in the first round of the 2013 Moto2 Championship in Qatar, Scott Redding, described his 2nd place finish as a "mega start to the season".

Redding lead for 7 of the 20 laps but eventually finished just 0.8s behind last year's Championship runner-up, Pol Espargaro, after a thrilling finale to the race.

The 20 year old from Gloucester, who proudly displays the Bike Social website address on his visor, started the race from 4th place on the grid and despite some clutch issues he was soon part of a three man breakaway at the head of the 32-man field.  By lap 9 of the 20 lap race, Scott got past Nakagami and into the lead but with only 5 laps remaining it was Championship favourite Espargaro who took over at the front.

Scott said, "I saw the pit board each lap so I knew he (Espargaro) was getting closer. When he went by I knew that I could stay with him, learn where I was faster then my plan was to stay on his rear wheel coming out of turn 6 on the last lap, tuck in through 7, 8 and 9 then slam a move up the inside of 10 but I got some bad chatter through the last left-hander and lost the momentum that I needed."

Redding's explained that his target before the race was to finish on the podium, not necessarily to lead the race or be so close to victory.

He continued, "I felt good with my tyres and got into a rhythm early. Racing in the dark suits me, it helps me focus, a bit like having tunnel vision".

The next race takes a step into the unknown at the at the new Circuit of the Americas in Texas, USA, on 21st April but whilst Scott will be glued to the track guide, he won't be stuggling up the huge incline at the end of the start/finish straight on the in-line skates he formerly used to learn each track on having ditched them for this season! 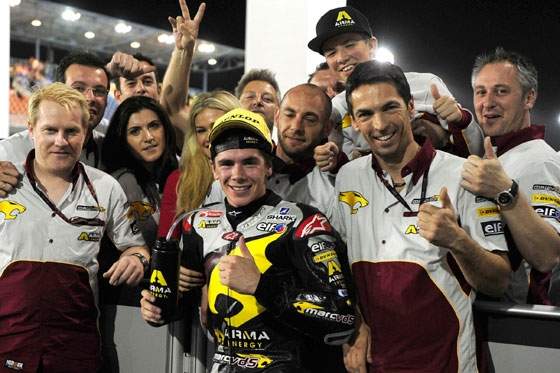