One day Grand Prix at Motegi? 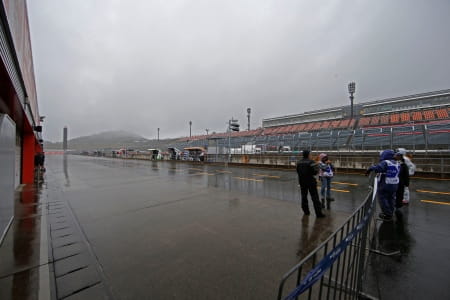 Thick fog and rainfall meant the emergency helicopter scheduled to be present at the circuit could not get there, and with an hour’s drive to the nearest hospital, Race Direction decided this was not a risk they were willing to take.

In a press conference this evening, Race Direction said they’d considered many options with the circuit organisers hence the practices being put on hold rather than cancelled immediately.

Race direction claim the forecast for tomorrow and Sunday is somewhat brighter but they have drawn up three different schedules to be used if necessary. If the helicopter still cannot fly tomorrow afternoon, it will be dismantled and transported to the circuit by road ready for Sunday.

The hope is that Saturday’s schedule can be run in full, with extended sessions to make up for lost time today. Should the weather have not improved tomorrow morning, sessions of seventy five minutes would be run during the afternoon. If no action goes ahead tomorrow, a schedule overhaul will see practice, qualifying and the races on Sunday.

Rider consultation will be made before a decision is made, with no plans in place yet should the weather affect Sunday’s schedule.