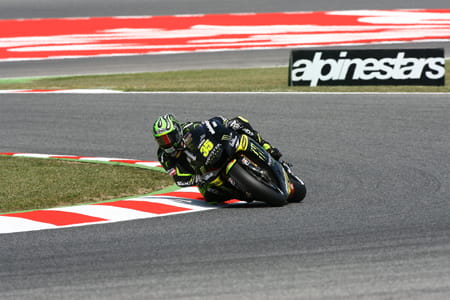 Another MotoGP weekend is upon us again, although for many race fans, there has been no break in the action over the past two weeks as the Isle of Man TT road races have dominated the headlines. For the teams and riders, however, they will surely have used the break to train and prepare for the sixth round of the season at Catalunya, or in Brit Bradley Smith's case, he'll no doubt have been trying to get as fit as possible for the next event following his crash at Mugello.

Spain's Circuit de Catalunya (above) is hosting this weekend's premier series for the 14th time and as usual, the circuit is bound to be packed with spectators as six of the leading contenders are Spaniards, including Jorge Lorenzo and Dani Pedrosa. Undoubtedly the home fans will be cheering for another Spanish 1, 2, 3 - like we’ve already seen this year in both Texas and Jerez.

On current form the only rider likely to be spoiling this is Cal Crutchlow having enjoyed consecutive podiums over the past two rounds - the first Brit to do so in the top class since Ron Haslam in 1967. The man from the Midlands will be looking to close the six-point gap that sits between him and third place rider Marc Marquez, who will also be looking to do well on home soil

As one of this year's rookies, Marquez is enjoying a fantastic start to the 2013 season and will be fancying his chances this weekend having finished on the rostrum on his last three visits to the track, including a win in 2010’s World 125 race.

In the other classes, keep an eye on Moto2 contender and Bike Social-supported Scott Redding, who after two wins will be looking for the hat trick at Catalunya...