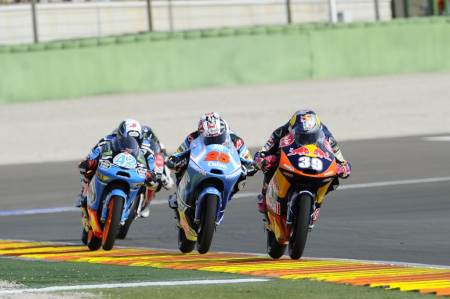 When Moto3 replaced the 125cc category in 2012 there were fears the new format could stifle the intense competitiveness of the introductory Grand Prix class. After two seasons it’s become quite clear that these fears need not have been, with the 2013 championship being decided on the drag to the line at Valencia, the final round.

In fact, Moto3 was by far the closest-fought Grand Prix championship in 2013 with three riders scrapping until the bitter end for the crown. It was always about three riders in 2013, Luis Salom on the Red Bull Ajo KTM, Alex Rins on the Monlau Competicion Repsol KTM and Maverick Vinales on the Team Calvo KTM.

In fact, there were only nine instances throughout the entire season the podium wasn’t completed by the Spanish trio. The first two races were dominated by the three, with Salom taking victory at Qatar and Rins two weeks later in America. It became three winners from three races at Jerez as Vinales took the spoils before going on to win back to back races with a victory in Le Mans too.

Then came a dominant run from Salom, who took three race victories in Mugello, Catalunya and Assen to open a tiny gap at the top of the table. It took eight races for the Red Bull KTM rider to finish off the podium when he took fifth place after breaking is foot during qualifying an Indianapolis. He bounced back for the next two rounds though, taking victory at both Brno and Silverstone although failed to finish on the podium for two rounds after that taking fourth place at Misano and Aragon.

This would mean the championship came down to the final round in Valencia, with Salom leading Rins and Vinales and just five points separating the three. It was simple – whoever won the race, won the championship. Luis Salom cracked under the pressure early on, crashing out trying to keep up meaning the championship would be between Rins and Vinales. The last few laps were intense, with positions changing regularly. On the final lap, Vinales asserted his dominance but Rins couldn’t give up, he tried a risky move at the final corner only to run wide while Vinales - who had anticipated the attack - kept a tight line to dart to the finish line and become champion. To add insult to injury, Rins wide exit from the final turn saw him out-dragged to the line by Jonas Folger.