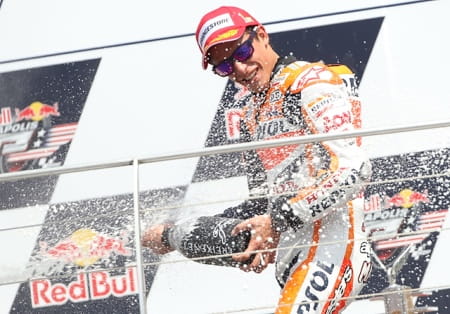 This weekend saw the tenth round of the MotoGP World Championship from Indianapolis and Spanish wonder-kid, Marc Marquez dominated in America for the third time this season. The twenty year old rookie (yes, let’s not forget he’s a rookie) took an astonishing pole position, breaking the lap record on Saturday and he certainly didn’t stop there.

Jorge Lorenzo got a strong start from the first row of the grid to lead the pack into turn one, followed by Dani Pedrosa and Marquez. Bradley Smith made a stunning start from his best ever qualifying position, placing himself in fourth at the first turn ahead of team mate Cal Crutchlow.

Lorenzo led for a few laps, as Marquez lined up his team mate for a pass. The young Spaniard wasted no time in getting his RC213V to the front of the pack once past Pedrosa though, subsequently building enough of a gap between himself and the Yamaha man to lead until the end of the race. It was a good day for Repsol Honda all round in the end, as Dani Pedrosa slipped past Lorenzo into the first corner with a few laps to go to take second place.

Throughout the twenty-seven lap race, Tech 3’s Cal Crutchlow and Gresini’s Alvaro Bautista had been scrapping for fourth place, in the closing laps they were joined by Valentino Rossi, who had seemingly conserved his tyres so well he could attack at the end. Rossi came out on top of the duel on top, from Crutchlow fifth with Bautista finishing a somewhat unlucky sixth after a good ride from the Spaniard.

There was also last lap drama further down the pack with the Ducatis, a last corner pass from Nicky Hayden on team-mate Dovizioso saw both Desmosedicis go wide coming onto the straight, jumping over the humped curbs. This gave Bradley Smith the chance to shoot past the Ducati pair to claim eighth. Hayden’s pass paid off as he took ninth, ahead of Dovizioso.

Marquez’s fourth win of the season puts him twenty-one points ahead of team-mate, Pedrosa in the championship standings with Lorenzo a further fifteen points behind.

In Moto3, Alex Rins took a stunning victory from his team-mate, Alex Marquez with Maverick Vinales taking third. Championship leader, Luis Salom finished off the podium for the first time this season in fifth after he injured his ankle in a qualifying crash.

Esteve Rabat stormed to victory in the Moto2, from Takaaki Nakagami who led the majority of the race. Britain’s Scott Redding increased his championship lead as he took third while rival Espargaro finished fourth.