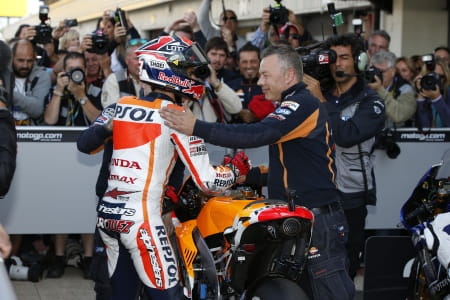 Marc Marquez has once again shown he is a class act today at Silverstone.The young Spaniard took pole position for tomorrow’s race, obliterating the lap record in the process. Marquez’s fourth pole of the season came in the last few minutes of the session and was 1.3 seconds faster than Casey Stoner's 2011 record.

After a strong performance in FP4, Yamaha's Jorge Lorenzo was favourite for pole position and until the last few minutes it looked as if he'd have it. Lorenzo's 2'00.816 could well have seen the Spaniard take his third pole of the season had it not been for the last minute heroics of Marquez.

After two crashes in this morning’s session, Britain’s Cal Crutchlow will line up alongside his Factory Yamaha counter-part rounding out the front row of the grid. This is the first time Crutchlow has qualified for his home Grand Prix (due to injury) and looks in good form to fight for a podium tomorrow.

Stefan Bradl’s last lap saw him take fourth on the grid pushing Dani Pedrosa down to fifth while Valentino Rossi rounds out the second row. The usual top Ducati spot of seventh was sealed by Andrea Dovizioso from Alvaro Bautista while Nicky Hayden demoted Bradley Smith to a fourth row start at his home Grand Prix. Colin Edwards was top CRT after a fall in FP4 for Aleix Espargaro saw him out of qualifying with a fractured finger.