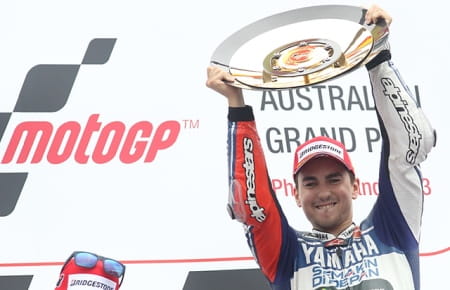 We already knew there was a huge question mark over what was going to happen at the Australian Grand Prix after Race Direction announced riders would have to make a compulsory pit stop mid-race as the tyres could not last the distance.

On Sunday morning, the race distance was further reduced to just nineteen laps, leaving riders lap 9, or 10 to enter the pits. The race got off to a usual start with Lorenzo taking the lead followed closely by the two Hondas. When it came to pitstop time, Pedrosa pitted first entering the pits on lap nine from third place with Lorenzo and Marquez staying out.

The drama came however when Lorenzo pitted, younger Spaniard, Marc Marquez continued therefore completing more than ten laps on a slick tyre and breaking the rules. Marquez entered the pits a lap later and on exit he collided with Lorenzo, fortunately without serious consequences. However two laps later the race was all over for the Spaniard, as the black flag was drawn with the number 93.

Lorenzo went on to comfortably take victory from Pedrosa and Valentino Rossi got back on the podium despite pressure from Cal Crutchlow and Alvaro Bautista.