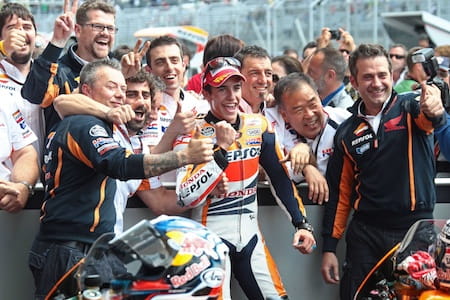 Marc Marquez has become the youngest winner of a MotoGP race after taking victory at the Circuit of The Americas yesterday, in only his second race competing in the premier class. Speaking of his victory Marquez said: “This is a dream come true. I would like to thank the team; without them this would not have been possible.”

The youngest rider to start from pole, he was overtaken by his teammate Pedrosa into the first corner but held on and managed to reclaim the lead thirteen laps into the race into the Turn Seven chicanes. Initially Pedrosa held on but after a few laps started to drop back. Pedrosa said: “I am very happy with the bike. The start of the race was good, but I gradually started to lose strength in my left arm and I couldn’t change direction as quickly through the chicanes.” Three laps before the end of the race he made a mistake and lapped 1.5 seconds slower than his teammate, which ultimately sealed victory for Marquez.

Lorenzo had a steady race, finishing a somewhat predictable third. He said: "We found something in the warm up - changing the gearing from 1st to 2nd in the hairpin corners - but we needed to find 0.2 seconds in order to compete with the Hondas."

Meanwhile, Britain’s Cal Crutchlow, who had not tested at the circuit before, finished 4th ahead of Bradl and Rossi: “We have worked really hard this weekend and with short resources. I had a plan in my head to beat some of the riders who had tested here, and we did that. We can move on to Jerez proud.” Cal was speaking of the fire in the Tech 3 Garage that resulted in, amongst other things, the team’s laptops being flooded by sprinklers.

Andrea Dovizioso, Alvaro Bautista, Nicky Hayden, and Andrea Ianone completed the Top 10 finishers. As the series heads to Jerez on 5th May, Marquez leads the Championship with the same amount of points as Jorge Lorenzo, with Pedrosa in Third.