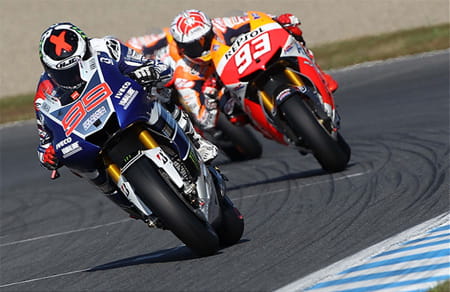 After poor weather conditions affected both Friday and Saturday at the Japanese Grand Prix, there were many doubts about what would happen come Sunday. However, once the thick fog which delayed the morning sessions had lifted, the circuit was basked in sunshine.

After last weekend’s drama at Phillip Island, Marquez needed to win the race with Lorenzo in third to take the title however Lorenzo clearly had other ideas. The Mallorcan shot off the line into the lead and - despite Marquez closing in towards the end of the race – took victory comfortably to reduce Marquez’ lead to just thirteen points ahead of the final round.

Dani Pedrosa took third place, although it had looked as though Rossi could give him a run for his money. The Italian made a rocket start to end up behind his team mate in the lead, with it looking possible the nine-time World Champion could help Lorenzo reduce Marquez’ title lead even further. However on the first lap Rossi overshot it into the hairpin losing out on positions to both Repsol Hondas. A lap later, Rossi made the exact same mistake only this time running on into the gravel. The Italian re-joined and had worked his way to sixth by the end of the race in sixth behind Stefan Bradl who put in an incredible effort after breaking his ankle two weeks ago in Malaysia. Alvaro Bautista finished fourth.

Cal Crutchlow took seventh once he’d eventually got past his team mate, Bradley Smith who put in a strong showing in the first half of the race despite poor qualifying. Nicky Hayden ended up ninth even though he’d started on the front row with team mate Dovizioso in tenth.

In the Moto2 race, Scott Redding’s title dreams were shattered as he became caught up in a crash with Esteve Rabat bringing out the red flag. On the restart, Pol Espargaro won the race therefore taking the title. While the Moto2 title was being tied up, the Moto3 was thrown into the air as championship leader LiusSalom was taken out in the early laps. He remounted only to later fall again. Further drama struck as second in the championship Alex Rins also fell. With Maverick Vinales leading, it looked as if the young Spaniard would take the title lead however he was pipped to it on the last lap by Alex Marquez, meaning the championship order remained the same with just five points now separating the three.