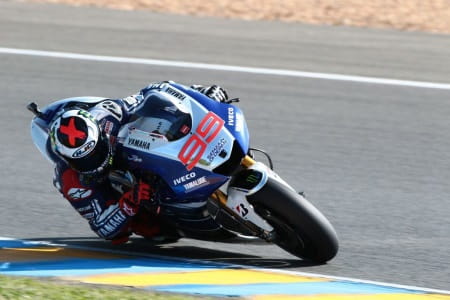 Jorge Lorenzo has been ruled out of action in this weekend’s Grand Prix at the Sachsenring after a heavy fall in the second free practice session. The Mallorcan high sided from his Yamaha M1 this afternoon landing upon the shoulder he injured just two weeks ago in Assen.

Rumours suggest Lorenzo has bent the titanium plate in his collarbone and will need further surgery, therefore sitting out the rest of the weekend and quite possibly next weekend’s round at Laguna Seca. Lorenzo had been on strong form this weekend, despite still riding with a broken collarbone. He topped the first practice session this morning and was leading the session when he fell this afternoon. It is expected Lorenzo will fly to Barcelona for surgery. Missing this weekend and potentially Laguna Seca would mean he has over a month to recuperate before the series returns to action in Indianapolis.

With Pedrosa currently leading the title chase by 9 points, Lorenzo’s title challenge will take a massive hit with him missing two rounds. Britain's Cal Crutchlow also fell heavily in the session, suffering friction burns. He has been passed fit to race.