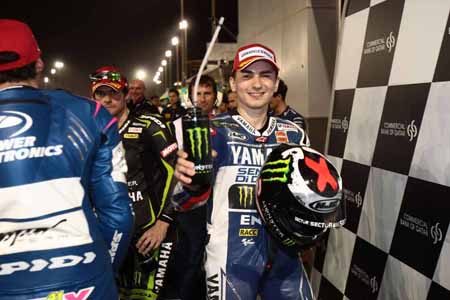 The MotoGP season got off to a thrilling start under the cover of darkness in Qatar this weekend, with double world champion Jorge Lorenzo clinching the first race of the season by a huge six-second advantage. However, in what was one of the most exciting MotoGP races of recent times, multiple champion Valentino Rossi showed a magnificent return to form – taking the second step of the podium behind team-mate Lorenzo.

Cal Crutchlow also had a fantastic race – battling hard with the frontrunners and contesting for third place after qualifying in second position. However, an all-Yamaha podium wasn’t meant to be after the British rider dropped to fifth place by the chequered flag.

The eventual third place went to MotoGP rookie Marc Marquez, who joins the premier class this year after winning the 2012 Moto2 Championship. The Honda rider was closely followed by team-mate Dani Pedrosa, who finished the 22-lap race in fourth.

The MotoGP contingent now heads to the USA, for the second round of the series on 21 April.