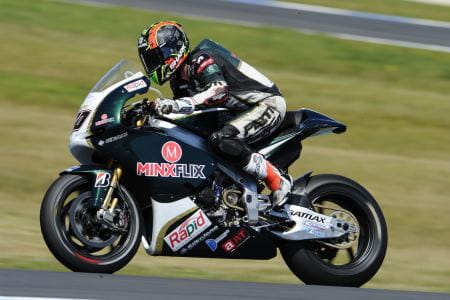 It has been confirmed that Michael Laverty will once again line up with Paul Bird Motorsport in the Grand Prix paddock next year, despite doubts about the Ulsterman’s Grand Prix future in recent weeks.

The thirty-two year old was out in Cartegena earlier this week testing with Bird’s BSB team but remained adamant he’d be riding in MotoGP for 2014. Laverty finished 25th in the 2013 MotoGP championship with a best finish of 13th at Jerez.

He will be joined by former World Supersport runner up, Broc Parkes, who rode for Paul Bird in World Superbikes in 2009. The pair will campaign the PBM Aprilias which are built in house at Bird’s workshop in Cumbria.

"We learned so much in year one that I'm delighted Paul has continued his involvement with MotoGP and that he's given me the opportunity to continue with the project” said Laverty.

“Everyone has told me that year two is much easier so the aim is to put into place what we have learned and to raise our game accordingly. The class is going to be a lot tougher with the new production bikes but our aim is to consistently score points."

Parkes added: "Firstly, I'd like to say a massive thanks to Paul Bird for the opportunity to work with his team once again; I'm really looking forward to it."

“This is the premier class and it's every rider's dream to race in MotoGP. I know this is going to be a tough season but I'm certainly up for the challenge, I can't wait to get started."