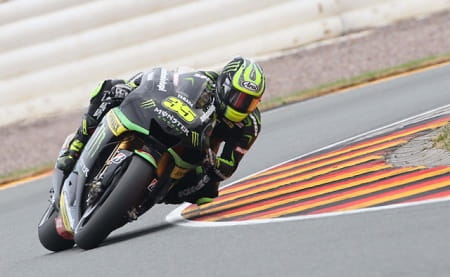 The Laguna Seca round of MotoGP kicks off this evening and it’s starting to look like it could be one of the most interesting races of the year. The two title contenders injured themselves (or injured themselves a little bit more in the case of Jorge Lorenzo) last time out at the Sachsenring however it would seem both riders plan to ride this weekend – just a week after their respective incidents.

In Germany, the twenty-year old racing machine that is Marc Marquez took full advantage of the absence of his adversaries by winning the race, elevating him into the lead of the championship. Marquez has an extensive record of wins, podiums and decent results at a large number of circuits on the MotoGP calendar from his previous escapades in 125cc and Moto2 racing. While learning these circuits on a MotoGP machine is a challenge (one he seems to be quite good at…), Laguna Seca could possibly be the youngster’s hardest task yet. The lower classes do not visit Laguna as the paddock is simply not big enough to host all three classes, so Marquez is faced with the challenge of learning a new circuit while his competitors have the experience. He showed at Austin that he has no problem with learning a new circuit quickly; he impressed the world by becoming the youngest winner in the history of the premier class so it will be interesting to see how soon it takes him to run similar times to his rivals.

While you should never rule out Jorge Lorenzo and Dani Pedrosa for a win this weekend, with these two carrying injuries, the door to the top step of the podium is certainly ajar. Add in Marquez’ inexperience at the circuit and the favourites suddenly become Valentino Rossi and Cal Crutchlow. The last time Lorenzo rode injured, Pedrosa had issues and Marc Marquez was handicapped (in the form of a broken finger and toe) was Assen and Rossi stormed to the front and took the win. Even after taking this into consideration, you can’t help but think that if Cal Crutchlow is going to win a MotoGP race this has to be his best chance yet. He’s shown several times this season that he can beat Rossi - he did it last time out in Germany - so if Rossi is one favourite(based on the fact he has a factory Yamaha) it makes sense to say Cal is the other... Take this, throw in Marquez (as you can never rule him out) along with Pedrosa and Lorenzo and you have the recipe for a damn good race.

LCR Honda’s Stefan Bradl will be looking for his first podium after repeating his career best finish yet again at the Sachsenring. Add in the fact he’s trying to convince HRC to sign on the dotted line to secure the second part of his two-year deal and a podium is certainly a realistic expectation. The same goes for Alvaro Bautista; with murmurs of him being replaced in the Gresini team next year he too will be looking for a decent result.

There may not be too much for the home fans to cheer about though, with Ben Spies out for yet another round (to be replaced by Alex de Angelis) their hopes rest upon Nicky Hayden and Colin Edwards. With Ducati seemingly backtracking on any progress made this year it would be an incredible effort from Hayden to even get the bike into the top five and Edwards hasn’t been having a great time on his CRT machine either…

With Laguna behind the UK in time, Free Practice starts tonight at 7:30pm, qualifying is tomorrow at 9:30pm and the race will be Sunday at 10pm, all aired on British Eurosport.