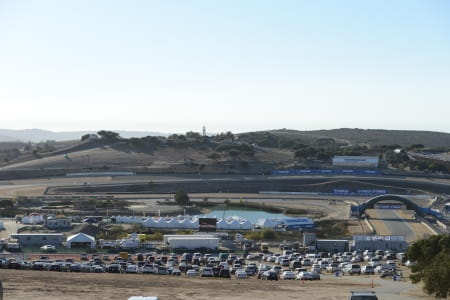 Laguna Seca have confirmed they will not host a round of the MotoGP championship in 2014. As we reported in August, Indianapolis signed a three year extension to their contract with DORNA on the proviso they’d make a few circuit improvements. With Austin also signed up until 2016 and there being little reason for three U.S rounds, Laguna then became favourite to be dropped.

Both the Indianapolis and CoTA rounds receive financial help from local authorities whereas Laguna doesn’t, so the Californian circuit have been pushed into a position where they cannot compete to keep the round.

There are currently no American’s at the sharp end in MotoGP with Ben Spies out through injury and Nicky Hayden struggling on a Ducati and with crowds down 15% at Launga Seca this year – Dorna’s decision not to run three Grand Prix in the states is understandable.

The new calendar, expected for provisional release this week is set to include a round in Argentina and Brazil could also make an appearance on the 2014 calendar, subject to FIM safety homologation.

It's not all bad for Laguna Seca, however. The recent World Superbike event at the circuit saw an attendance of 41,000, which would suggest the series is likely to head to head to Laguna Seca again.