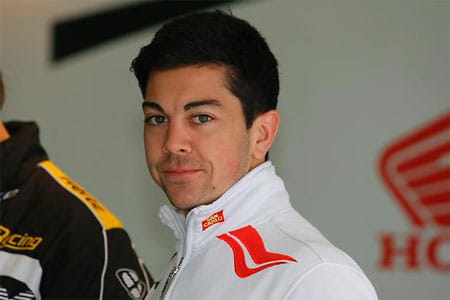 After a traumatic season in Moto2 last year, which saw Gino Rea scratching around to fund his own bike, the Brit has announced that he's back full-time in 2014 with his own team.

The team Rea was signed for in 2013 pulled-out of the Moto2 Championship ahead of the season opener in Qatar, leaving the Brit to find funding to run his own bike. It was a difficult season mixed up with occasional wild card rides, but one that earnt him a replacement ride for the long-haul races.

He scored two points finishes, the team’s best results of the season.

But for 2014, Rea remains in his own outfit, joined by a company called AGT as he looks to repeat his podium success of 2012.

You had tough year in 2013 for a number of reasons but things came together for you towards the end of the season seeing you take two points finishes. Can you sum the season up for us?

In one word I'd say: Tough. When my team withdrew before the season started I just had to remain positive. Everything happens for a reason right? As most people will know, I wanted to remain in Moto2 for 2014 and I felt the only way to do it was to keep my face in the Moto2 paddock. In the end it paid off, I was able to ride for a Spanish team at the flyaways and managed to bring them their best results of the season and their only points. I'd say I'm happy with the way I made the most out of a bad situation.

You’ve managed to sort out a full time ride for 2014 – that must feel pretty good?

It's still pretty surreal that's it's actually happening. It hasn't really sunk in yet that I have a full time ride secured. After this year, to know that I will be at all the races feels so good.
I can't thank AGT (American Green Technology) enough, along with Dave Peterson, Martin R. de Rooy and David Rea for all the effort they have put in to make this work.

When will you be out testing?

I wish I could go out now! Unfortunately for Moto2 there is a December and January test ban, so my first test will probably be at the first official Moto2 test at Valencia on 11th February. We had to miss the post season Moto2 tests after the final race, so I'm itching to ride again!

2014 will be your second full season in Moto2 – what are your expectations?

It's always hard to judge where you're going to be without having rode the bike yet, but I believe in the team and I believe in the bike.
At the Valencia finale this year whilst riding for my own team, I managed to qualify 13th and only half a second from second position. So if I can build on that from the start I'd be happy. But my personal goal is be with the front group and ultimately on the podium. I race to win, who doesn't?

There’s a vast number of fast riders in Moto2 – who would you class as some of your biggest rivals next year?

As you said, it's arguably one of the most competitive Championships in the world with a huge depth of talent. The usual guys that will be up there consistently are guys like Rabat, Luthi, Terol, Torres etc.

Suter have proved to be a good package and I'm really looking forward to getting on their new 2014 bike. They have been at the front this year and it looks like they have improved their new 2014 package so I'm very excited to ride it.

I think the pre-season tests will be important. That's something I didn't get to do this year and even last year.
Then onwards it’s about being consistently fast and adapting to each circuit as fast as possible. I believe my team will give me the best opportunity to do so and I can't wait to get started.