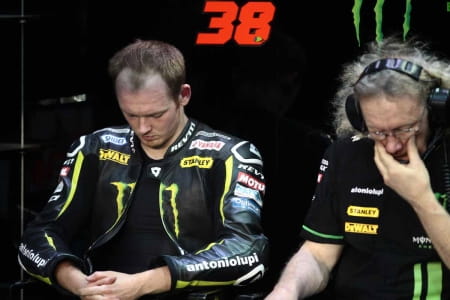 The Tech3 MotoGP team suffered a garage fire yesterday at the Austin track they are due to compete at this weekend.

One of the electric starters used to start the Yamaha YZR-M1bikes were the cause of the small fire inside the garage.

The Monster Yamaha Tech3 Team has issued a press release and praised the efforts and action of the Circuit of the Americas and the Austin Fire Department. The circuit sprinkler system was immediately activated and doused the fire with water which stopped it from causing any serious damage.

Despite having slight disruption prior to the weekend, with some computer equipment being damaged, participation in the race going ahead as planned.

The fire was dampened, but the hopes of the Tech3 haven’t been!

“We will be conducting a thorough investigation to find out why this issue
occurred and take the necessary steps to ensure it is not repeated in
the future. I would like to apologise to the Yamaha Factory Team, LCR
Honda and Cardion AB too, as the sprinkler system was also activated
inside their pit area as well. But it could have been much worse and
with the fantastic support of Yamaha and others in the close-knit
MotoGP community, I am confident we can participate in this
weekend’s race without any additional problems.”

The brand new, Circuit of Americas will be playing host to the second Moto3, Moto2 and MotoGP race, the second of the calendar and if the first race was anything to go by – it’s going to be a good one!