Double trouble: Are the Marquez’ set to take over MotoGP? 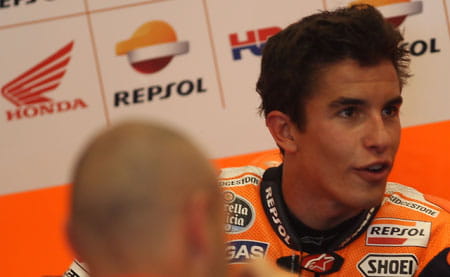 Marc Marquez is a Grand Prix racing sensation. By the end of next weekend he could have wrapped up his third Grand Prix title in four years, it would have been his fourth had he not been ruled out of two races at the end of the 2011 Moto2 season. He has thirty two Grand Prix victories to his name with six of these in the elite, MotoGP class. To top it all off, he’s twenty years old and next Sunday in Valencia he could become the youngest ever Motorcycle Grand Prix World Champion.

Looking to the future, the combination of Marc Marquez and Repsol Honda is frightening; if he’s this good in his rookie year surely he’s only going to get better. There’s something else as well; he has a brother, Alex, who has just won his first Grand Prix. He’s seventeen years old and currently fourth in the Moto3 World Championship after finishing no lower than fifth on all occasions but two, when he either didn’t finish or fell off and remounted. It’s his rookie season too…

Some are already calling an all-Marquez Repsol Honda squad for as soon as 2017 and in all seriousness, should Alex turn out to be as successful as his older brother – it’s not too unrealistic. Repsol brought Marc through from CEV to 125cc Grand Prix and into MotoGP and the Spanish oil giant has also brought the younger Marquez from CEV (where he won the Moto3 championship in 2012) to Moto3, with the Estrella Galicia 0,0 squad. It’s unlikely Alex will surpass many of Marc’s “Youngest ever” records, as Marc had taken his first championship by the time he was Alex’s age however, he’s almost certainly a future champion.

Alex is set to remain with the Estrella Galicia 0,0 outfit for 2014 who will switch to Honda machinery in a big-money effort to end KTM’s domination of the Moto3 championship. A 2014 championship win would see him move up to Moto2, as Estrella Galicia Team Principal, Emilio Alzamora believes strongly in the notion of “win and move on”. Even if he doesn’t win the Moto3 championship next year, he’ll probably still be in Moto2 by 2015.

In fact, when you think about it the prospect of the young Spaniard joining his brother in the Repsol Honda MotoGP team by 2017 isn’t that farfetched, particularly if DaniPedrosa is gifted with another couple of years. In fact, Marquez’ biggest threat for the Honda seat could be Britain’s Scott Redding should he impress in the next two years on the production and then satellite Gresini Honda. Of course it’s not quite as clear cut as that, especially when you consider where next year’s fast Moto2 riders will end up in 2015 especially with a close eye on TakaakiNakagami, as Honda have forever wanted a fast rider on their bike in MotoGP.

Aside from all of the crazy 2017 speculation, we’ve already become accustomed to hearing the Spanish national anthem in the Grand Prix paddock but over the next few years, it’s looking increasingly likely a large number of those P1 trophies will be going to the same family household. Also, let’s not forget; they aren’t the only fast, Spanish siblings in MotoGP…