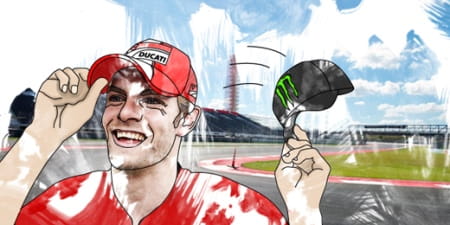 In July, Bennetts reported that Cal Crutchlow had an offer on the table from Ducati Corse and his signature was imminent. Following the announcement of his two-year deal to ride for the Factory Ducati team in 2014/15, the British MotoGP superstar spoke to Bike Social to set the record straight about his decision, his season so far and his determination to win every race.

The Coventry-born 27-year old is in his third and by far most successful MotoGP season having been plucked from the Yamaha World Superbike team to ride for Herve Poncheral’s Tech3 Monster Yamaha Team. Cal is currently sitting fifth in the World Championship as the top non-factory rider and only a handful of points behind Valentino Rossi.

It was Crutchlow’s wish for a factory ride that has led him away from Yamaha who, despite pushing as far as they could financially to keep hold of the British rider, couldn’t give him what he so strongly desired.

“I believe I was in the wrong place at the wrong time with Yamaha.” Crutchlow told BikeSocial.co.uk.  “They have Jorge [Lorenzo], World Champion, and they have Valentino [Rossi], who is still one of the best and his market value cannot be argued with. Yamaha clearly said to me if after next year they can keep both riders, they will.”

Crutchlow’s decision to ride with Ducati should come as no surprise, the now six-time podium finisher had considered a switch to the Italian marque for the 2013 season, only for the offer to be withdrawn in favour of Crutchlow’s then (and now future) team-mate, Andrea Dovizioso.

Ducati have had a somewhat troubled few years having not taken victory since Casey Stoner won at Phillip Island on the Desmosedici in 2010. Ducati were bought by renowned car manufacturer, Audi in 2012 with many hoping the new investor would oversee significant improvements to the GP effort. However, the highest placed Ducati rider – Andrea Dovizioso - currently sits seventh in the championship with a best result of fifth place at Mugello.  Crutchlow is at the top of his game and wouldn’t have agreed to such a move without considering all eventualities.  He seems aware of the resulting negativity and has called for support.

"I have made my decision to race with Ducati and I look forward to this new adventure.  I hope people and fans will support my decision, and as always I will give it 100%. I am happy to be racing with factory Ducati next year.  I believe in my own ability.”

The former World Supersport Champion who spent just one season in World Superbikes went on to take his first MotoGP podium in 2012 but few other riders have successfully made the switch from Superbikes to MotoGP and with changes ahead in both championships, Crutchlow agrees that it looks unlikely we’ll see many more riders make the jump at all…

“No riders are willing to take the risk and pay cut for the year, I believe” commented Crutchlow.  “I think Johnny Rea is the only guy interested to take that risk.  The way I look at it is that I had to take a big pay cut, a hard year, worst of my career maybe, but I had determination to make it work and now I believe it’s paid off.” 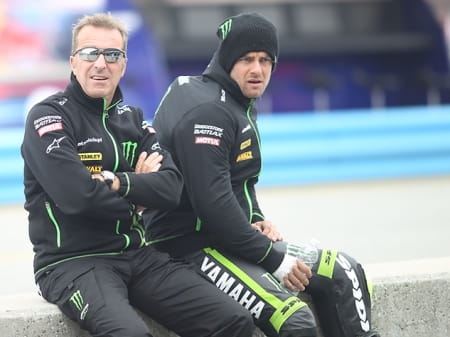 MotoGP rights holders, Dorna, and the FIM have been working over the past few years to make changes in MotoGP to bring costs down, keep enough bikes on the grid and head towards a more level playing field.  And Dorna’s CEO, Carmelo Ezpeleta, holds Cal in high regard having referred to him as “one of the biggest talents we have seen in the last few years” and quoted as saying “he is a fantastic asset for MotoGP”.  With the lack of British success in recent years plus the growing strength of the brand in the UK Crutchlow is certainly important to MotoGP who have only this year signed a multi-year mega-bucks deal with BT Sport to exclusively show MotoGP, Moto2 and Moto3 in the UK.

“First of all with Carmelo, he is a friend, and I truly believe he is doing a great job for MotoGP” Crutchlow said. “It must be one of the hardest jobs in the world to have when riders want one thing, manufacturers want another, circuits another and so on. It’s not easy to make rules that everyone is happy with. I think the championship is going in the right direction and I look forward to being part of it for as long as I can.”

Having taken four podiums this season, including two second place finishes, Cal is hotly tipped to take victory before his switch to Ducati in 2014.  A British rider hasn’t won in the elite class since Barry Sheene in 1981.

Cal has mixed history at the upcoming rounds; his highest finish at Indianapolis is eleventh yet Brno was the scene of his debut podium last year.  After these two races MotoGP heads to Cal’s home round at Silverstone, where he’s not had much luck in the past. He missed race day in 2011 after injuring his collarbone in a qualifying crash. In 2012, Crutchlow fell again in the build-up to race day, damaging his ankle. This time, Crutchlow returned to the circuit for race day to start from the back of the grid and battled his way to a heroic sixth place.

Fully aware of the previous lack of practice and qualifying time, he quipped, “I plan to only attend on race day at Silverstone this year. May as well not turn up to the rest of the weekend, I normally miss those days anyway!”

And looking ahead to the remaining half of the season, Crutchlow is as focused about his challenges and prospects of standing on the top step of the podium before his move to the Bologna-based outfit at the end of the year.

“I believe the bike suits many circuits.  The Yamaha is a very neutral bike so it works well everywhere, but at some circuits Honda has an advantage. I will not aim for a certain race to win but try to win them all.”

Many have spoken about the differences between the Factory Yamaha’s versus the Tech3 machine Cal has at his disposal but despite his competitiveness this season he still feels as though there’s room for development not just with the bike but his race-craft.

“My bike is a satellite bike and the same as last year’s bike that Lorenzo rode from middle of the year. A few differences are the seat, tank, fairing and swing-arm. But engine is apparently the same. I really think my bike is very good and competitive. I believe I have to learn some more to be competitive, not just the motorcycle package. I think as soon as you lose sight of that it goes downhill, it’s not all about that bike.”

For your chance to win a pair of tickets to the British MotoGP at Silverstone to see Cal in action, simply sign up.