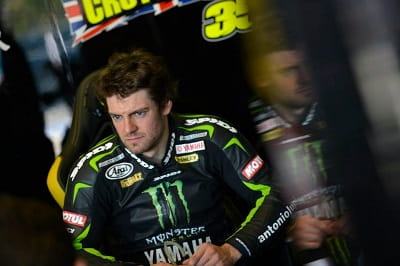 Monster Tech3 Yamaha’s Cal Crutchlow yet again showed impressive pace to finish second fastest at the Jerez MotoGP test despite not having any real new parts to test on his Yamaha M1.

A battered and bruised Cal Crutchlow, following a big crash at the weekend, said: ““I’m happy to have got through so much work today and do almost 70 laps because my back is still quite sore from the two big crashes I had on Saturday. I tried a different frame today but honestly I couldn’t really find any improvement. There were some positive and negative points but overall it felt the same as what I’ve been racing so far. I tried a few engine braking settings for Yamaha and it was important for them to get some data and information in that area."

He added: "We ran the bike with a lot of engine braking to see how the bike would react and make it slide on corner entry. I couldn’t really feel a big benefit going into the corner but it was a bit better braking straight up and down and it was a worthwhile exercise. It was a positive day and after a tough weekend with the crashes to finish fifth in the race and second in the test today shows again we are doing a good job.”

Despite incredibly impressive form, rumours suggest that Crutchlow may lose his ride in Tech 3 Yamaha next year to Moto2 hotshot Pol Espargaro. Yamaha appear to be very keen to sign the youngster for MotoGP, perhaps even at the expense of Crutchlow.

Talk is that Suzuki will be back in MotoGP in 2014 and that Crutchlow could be the signature that the Japanese firm is after signing for their big MotoGP comeback.