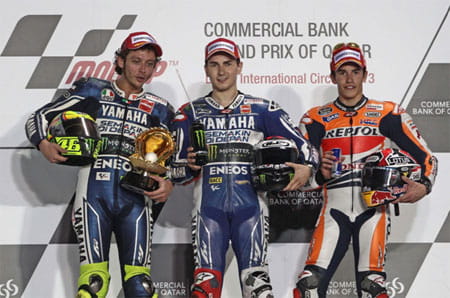 The opening race of the 2013 MotoGP championship suggested three things: Firstly, that Jorge Lorenzo was once again going to be a force to be reckoned with. Secondly, that it wouldn’t take long for Marc Marquez to get up to speed and finally, that Valentino Rossi would be competitive.

Two of these were proven correct, as Jorge Lorenzo went on to push for the title until the very last round despite missing a race through injury and Marc Marquez did not finish a race off the podium all season. Unfortunately, the latter statement would not be true as fighting for second place in Qatar would become one of Rossi’s best rides of the season.

It didn’t take Marquez long to get up to speed at all, he took his first pole position at the second round in Austin ahead of taking his debut MotoGP victory a day later. After Jerez, there had been three winners in as many rounds alluding to what could be an epic battle for the title. Also suggestive of a good battle in 2013 was the scrap for second place, in which Marquez collided with Jorge Lorenzo at the final turn of the Spanish Grand Prix to take second place.

Many saw the fourth round in Le Mans as a signal of Marquez’s immense talent. As often is the case for the French Grand Prix, it was wet. DaniPedrosa shot into the lead from the start as it became clear Jorge Lorenzo was suffering some kind of issue. Marquez, riding the two hundred and fifty horsepower Honda for the first time on a wet, slippery surface fell back to ninth from the start. Within seven laps the young Spaniard began to pick off the pack, climbing all the way to third place behind Britain’s Cal Crutchlow. It took Marquez just seven laps to get used to a MotoGP bike in the wet, in race conditions; even the most hard to impress pundits were stunned. 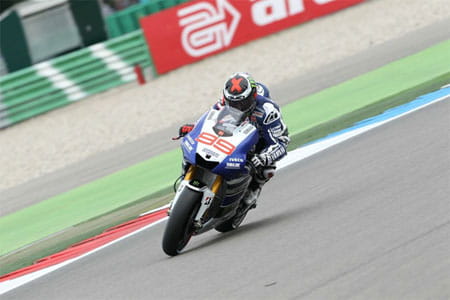 Many expected Marquez to suffer a few big falls in 2013 and it looked like they may be proven right as the twenty-year old slid off his RC213V at 180mph during practice at Mugello. It didn’t stop him though, he might have qualified just sixth on the grid but in no time he had fought his way up to a podium position come Sunday. Chasing Pedrosa hard, Marquez slipped off. It’s worth noting though that the cheeky youngster learned from his mistakes… he didn’t fall off during a race again.

Lorenzo took the victory in Italy and repeated this feat at the next round in Catalunya but it was at the following round in Assen where things got dramatic. Lorenzo fell while pushing too hard on a wet track in free practice, breaking his collarbone. It looked as though the reigning champion’s challenge was about to take a massive hit as he flew back to Barcelona for surgery. However, in a move that stunned the racing world Lorenzo returned to Assen on Saturday evening and started the race from 12th position, finishing fifth in a performance nothing short of heroics. With Lorenzo absent, Valentino Rossi took his chance to take victory for the first time in over two years however little did he know his Dutch delight would be his only visit to the top step all season.

With Lorenzo’s titanic efforts in Holland, the title battle didn’t look to have taken too much of a hit. However, further drama would strike in Germany as Lorenzo fell again during afternoon practice, re-breaking his collarbone. This time, there was no heroic return as Lorenzo took the even braver decision to sit out of the race, missing out on any points with a risk he could also miss Laguna Seca.  However, in a bizarre twist of events Pedrosa fell in practice the next morning, also breaking his collarbone. With two of the main championship contenders out, Marc Marquez took his chance to get back to the top taking victory from pole position. This seemingly gave Marquez momentum as he went on to win the next four races, including Laguna Seca – where he’d never raced before .

By the time the Grand Prix rolled into Silverstone for the British round, Marquez had built up a comfortable lead in the championship standings. His rivals knew full well they’d have to do something to stop him. And that’s exactly what Jorge Lorenzo did, in spectacular style. Having recovered from his collarbone injury the Mallorcan fought with the Repsol Honda rider until the bitter end, putting in a move at the penultimate corner reminiscent to secure the victory in spectacular fashion.

Lorenzo’s Silverstone resurgence carried on at Misano, where another victory reignited his title hopes but Marquez came back hard at Aragon, at the expense of his team mate who bore the brunt of a tough pass. The pass saw Pedrosa’s rear wheel sensor snap leaving him without traction control. Despite a later one point penalty, Marquez comfortably took victory. 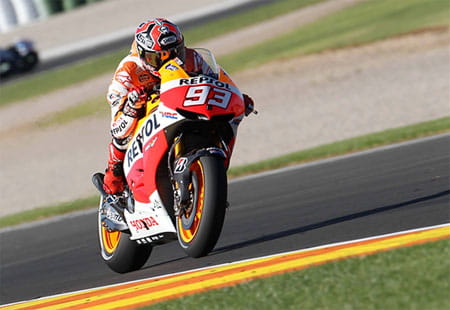 Pedrosa came back to take victory in Malaysia with Marquez second and Lorenzo third. Marquez’ first chance to take the title came at Phillip Island. Although everything was thrown into the air in Australia as tyre troubles led to compulsory pit stops. Marc Marquez stayed out one lap longer than permitted on a single set of tyres and was therefore disqualified. Victory for Lorenzo threw the title chase wide open and Marquez’ chances of taking the title for Honda at their home track were looking slim. What made them even slimmer was Lorenzo’s determination to keep it wide open, taking victory from Marquez once again, leaving just thirteen points in it as it came to Valencia.

Despite Lorenzo’s best efforts, Marquez couldn’t be held off for the title at the final round, making him the youngest champion ever after a phenomenal debut season. What will next year bring?