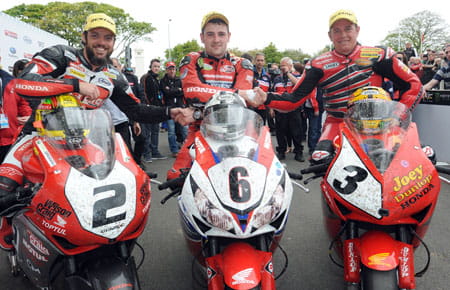 Michael Dunlop powered to a runaway victory in the Isle of Man Dainese Superbike TT – 30 years on from his late, legendary uncle Joey taking the first of his record haul of 26 victories.

Riding his Honda TT Legends Fireblade, Dunlop had taken the lead by the time he reached Ramsey on the opening lap, and then riding hard, eased further clear of first Gary Johnson who ran out of fuel, then Guy Martin, before heading off John McGuinness, the 19 times race winner who had no answer to the pace of his team-mate.

Dunlop took the victory, his fourth on the Island, by 41 seconds from Aussie Cameron Donald with McGuinness who had incurred a penalty for speeding in the pit-lane in third place, but taking some consolation by upping his outright record to 131.671mph on his final lap of the race.

“Just unreal, this is fantastic,” said a delighted Dunlop. “I always wanted to win the Superbike race, now I’ve done it – it is special. I got my head down from the start and said to myself right, you are going to have this one.”

Guy Martin took fourth for Tyco Suzuki ahead of Manxman Conor Cummins on the Milwaukee Yamaha, while Aussie Josh Brookes marked his TT debut with a tenth place finish and the newcomers lap record at 127.726mph

But there is no time for celebration as they all face Supersport and Superstock races today.