John McGuinness is the King of the Mountain 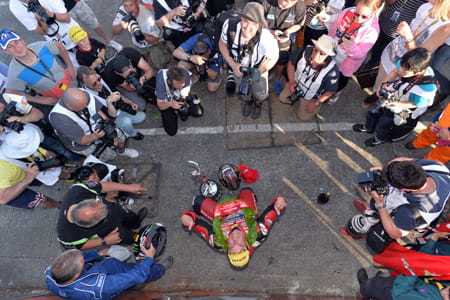 John McGuinness saved the best for last as he re-established himself as the “King of the Mountain” by winning the delayed finale to this year’s festival, the prestigious six lap Pokerstars Senior TT.

The Lancastrian overcame the early challenges of his Honda TT Legends team-mate Michael Dunlop to chalk up his twentieth victory on the Island by some ten seconds with Padgetts Honda rider Bruce Anstey third.

Earlier in the week, Dunlop had won four out of four races, leaving McGuinness trailing but this time it was all change as the man from Morecambe took charge on the second lap and then eased clear.

“Brilliant, just fantastic. If you were to choose a race to win, it would be the Senior,” said McGuinness. “I’ve not had a bad week but I’ve not been able to pull the win off till now. The bike was awesome, the pit stops great and we saved one of the best races till last. It was incredible action.”

The race had been re-started some three hours after the initial start – then, just seven minutes into the race James Howarth crashed on Bray Hill with his bike and flying debris hitting and hospitalising ten spectators whose injuries were described as “slight to serious but now believed to be life threatening.” Howarth was treated for a "minor fracture."

James Hillier made his intentions plain with a record busting opening lap as he dominated the three lap BikeSocial Lightweight TT to take his first victory on the Island, and he sealed it in style by bettering his own record with a flying final lap at an average speed of 119.130mph.

Hillier enthused: “Unbelievable, awesome. I loved every minute of it. The bike worked so well, just magic. I really wanted the lap record and rode as hard as I could and everything worked out.”

Dean Harrison, half a minute down took second place with Conor Cummins third, his dad Billy also finishing the race but in 35th place, while another Manx hero was celebrating the safe completion of a century of TT race finishes. David Madsen-Mygdal brought his Martin Bullock Kawasaki home in twentieth place.