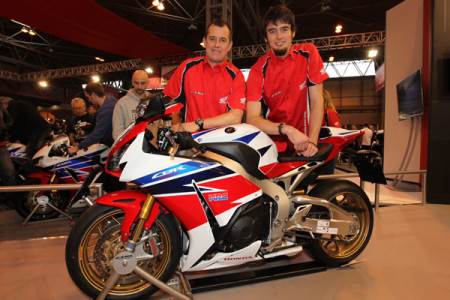 Honda Europe has announced John McGuinness will be joined by Connor Cummins for the North West 200 and Isle of Man TT races next year.

The team took a clean sweep at this year’s Isle of Man TT with Michael Dunlop and John McGuinness; however four-in-a-week Dunlop has opted to sit out of racing for 2014 after being unable to reach a deal with Honda.

Cummins, who has been plagued with injury over recent years, starting with the ginormous crash in the 2010 Senior TT will join twenty-time TT winner McGuinness in a two-pronged roads campaign for 2014.

"I’m really glad to be staying with the Honda to continue the strong relationship we’ve built up in road racing over the years” McGuinness said.

“The team is like family to me and it’s important that I have support that I know I can rely on 100%. It’s great news that Conor will be joining the team. I have a lot of respect for him – he’s young, he’s hungry for it and he has so much passion for racing. It will be a pleasure to be his team-mate. This year proved that there’s life in the old dog yet, so I can’t wait to get back on the Fireblade and see what we can do."

"I am thrilled to bits to be with Honda in 2014. In my eyes this is the absolute pinnacle of road racing” added Cummins.

“Riding for a team like Honda has been something I’ve been aiming for my whole career so for me this is a huge deal. The team has so much experience and I just want to make the most of the opportunity I’ve been given. I’m really looking forward to racing the new Honda Fireblade and hopefully brining home some good results."