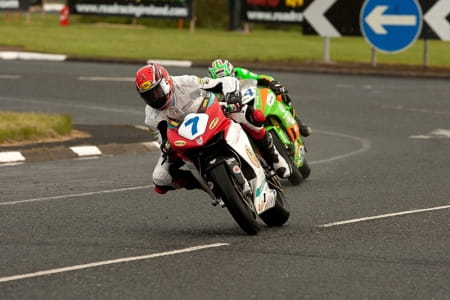 Gary Johnson is one of the stars of today’s road racing. Currently preparing for the Ulster GP, where last year he finished one race runner-up the bold Lincolnshire man is also scheduled to make an appearance at the Bennetts Classic TT next week. We caught up with him to see how it’s all going:

You’ve got good form at the UlsterGP, what are your hopes for this year?

Yeah we’re looking to carry on really. We’ve had a good year so far but we’ve had a bit of bad luck so here we’re going to try and erase the bad luck and turn it into results. Weather permitting we’ll see how it goes. I’m chuffed with all my bikes and I’m going to give it 100%, it’s a good circuit here.

What is it you love about racing on the roads?

It gives you an adrenaline buzz that you can’t replicate short circuits. It makes great racing. The speed has to be the biggest thing, the Ulster Grand Prix for example is fast and flowing you get such a good feeling from it.

It’ll be a busy few weeks for you as you’ll be going from the Ulster GP to the Classic TT. What are you riding at this years classic?

I’ll be riding an MV Agusta MV3 500 – a replica of the bike Agostini won all his world titles on. In the Formula 1 class I’ll be riding an FR69 GR1000 Suzuki which has previously been ridden by Ryan Farquhar, but I’ve not seen it yet!

You ride an MV F3 on the roads at the moment for Jack Valentine, it must be pretty cool to get the chance to ride the old MV too?

It’s awesome. Both bikes are lovely. The modern one is just sex on wheels and the old one is just class. They are similar in some ways, they both sound beautiful and go really well. It’ll be interesting to see how the old 500 performs, hopefully it’ll be competitive!

The Classic TT is a celebration of the history of the Isle of Man TT but aside from the parade laps there are some real races, how far do you push in these?

Conditions are a big factor. The bikes are worth over £200,000 so they aren’t something you’d want to ride without respect for the owner. But when you get that tap on your shoulder at the top of Bray Hill we will be trying to go as fast as we can while being sensible. We need to remember we aren’t on top spec race rubber as well, we’re on period tyres! We’ll push as close to the edge as we can get with a comfortable safety margin. Three racing laps for a classic is asking a lot though!