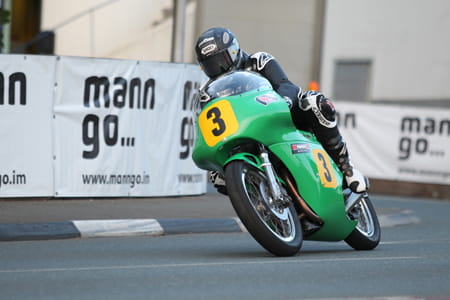 Some of the biggest names in motorcycling history took to the track yesterday evening as qualifying began in the inaugural Bennetts Classic TT Races. Visitors watched on as an eclectic mix of machines including Patons, Benellis, Velocettes, Matchless, Enfields and Nortons were ridden around the Mountain Course by some of today’s leading TT stars – as well as some of classic racing’s veterans.

In the untimed session, riders took advantage of the session to get plenty of practice ahead of today’s first timed session – although oil on the track at Greeba Bridge and Barregarrow delayed the start, which meant that the classic riders only managed a single practice lap.

Bruce Anstey piloted the McIntosh Norton, Cameron Donald was on the Matchless, Ian Lougher was on the Royal Enfield, Steve Mercer and Dan Cooper represented the Yamaha Classic Race Team while experienced Classic Racer Olie Linsdell piloted the Giovanni Cabassi Paton. Gary Johnson went out on a 1250 'Harris' as well as his MV Agusta, while 1993 Formula One TT race winner Nick Jefferies returned to the Mountain Course for the first time since 2002 aboard a Honda.

TT race legend John McGuinness, who competed in the World Endurance Championship in Germany over the weekend, rode the Team Winfield Paton. Getting into the spirit of the event, he wore retro leathers and an historic Shoei helmet, complete with Lancashire red rose! But despite the session being untimed, it was Michael Dunlop aboard the Team Classic Suzuki XR69, who pushed hard to be first back to the Grandstand.

This evening’s timed session begins at 6.20pm. The Bennetts 500cc race takes place on Saturday 24 August with the combined Okells 350/250 race and the Motorsport Merchandise Formula 1, 2 and Formula Classic Races both on Bank Holiday Monday.