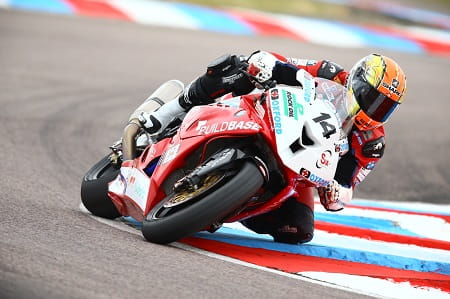 Lincoln’s Lee Jackson will make the step up to the British Superbike Championship with Buildbase BMW in 2015 after finishing third in the National Superstock 1000 series this year.

Jackson got a first taste of BMW’s S 1000 RR superbike in four rounds this season standing in for injured team mate James Westmoreland. The 19 year old impressed in the four rounds, taking a number of points finishes before a strong top ten at TT circuit Assen in September.

“I’m really looking forward to riding with Buildbase BMW for the full season in British Superbikes next year”, Jackson said. “This season I rode the bike for four rounds and really enjoyed it. It’s such a different sensation compared to Superstock.”

“I can’t wait to step up and get to know the bike even better and see what we can do”, he continued. “Kiyo is a great team mate; he’s such an experienced rider so hopefully I can continue to learn from him. I’m really grateful that the team has given me this opportunity and I’d like to thank all those who have supported me through the past few years.”

Team boss Steve Hicken added: “We’re delighted that Lee is moving up to the Superbike class after two years with us in Superstock 1000. He is one of the brightest young talents in UK racing at the moment and we feel this is the right time for him to make the step up. The championship needs some new, young British talent and we are confident in what Lee can achieve.

“With Kiyo and Lee, we have a great package of experience, youth and talent. After a remarkable 2014 season, our only aim is to go one better in 2015.”