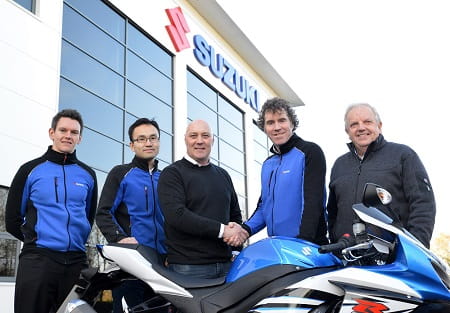 Legendary team boss and engine tuner Jack Valentine will be reunited with Suzuki next season as the Halsall Racing team becomes Suzuki’s official representative in the British Superbike Championship.

Yesterday it was announced that the Tyco-backed TAS Racing team would end their 14-year-long relationship with the Japanese manufacturer, with the Northern Ireland team expected to switch to BMW machinery for the 2015 season.

Valentine has a long history with Suzuki, including managing Paul Denning’s Crescent outfit in the British and World Superbike championships from 2008 until 2013. In that time, the team took victories with Tom Sykes, Sylvain Guintoli, Tommy Hill and narrowly missed out on a British title with John Hopkins in 2011.

The Halsall Racing team entered the British Superbike Championship for the first time in 2013, showing surprising form in the mid-season with Tommy Bridewell taking three podiums for the outfit on Kawasaki machinery. The outfit, owned by software developer Martin Halsall, suffered a tough start to 2014 with Harry Hartley and Lee Costello but rounded the season off with their debut pole position and a podium finish from Jon Kirkham at Assen.

“Halsall Racing becoming Suzuki’s official team in British Superbikes is great news for me, it’s like coming home”, said Valentine speaking to Bike Social. “Martin Halsall has put so much of his own money into the race team over the years so it’s nice to see the team become an official manufacturer supported effort for him, as without him none of it would have been possible.

“We’ve a great team of engineers at Halsall Racing and with Suzuki’s support and my previous knowledge; I feel that we can make a mark with the GSX-R1000 next season and we can’t wait to start testing early next year.”

The Halsall Team is yet to announce their rider line-up for 2015 but this news sparks rumours that long-time Suzuki man Josh Waters could move across from the Tyco outfit. Bike Social sources claim the team are also in negotiations with Assen polesitter Christian Iddon.