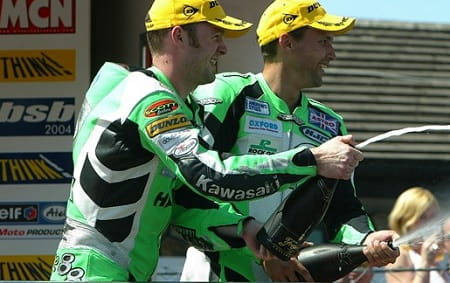 British Superbike veterans, Glen Richard and Scott Smart will make a return to the series this weekend at Oulton Park as they become Kawasaki team-mates once again lining up with the Anvil Hire TAG outfit.

Both of the team’s regular riders are out through injury, with Brands Hatch second-place man Richard Cooper out of action after breaking his arm in a qualifying crash last weekend at Thruxton and former Aussie champ Mitchell Carr still out from an injury sustained at Snetterton back in June.

Richards and Smart retired both from competitive racing at the end of the 2013 season. Richards, who has won titles in the Supersport, Superstock and Superbike EVO classes, made a brief return earlier this year deputising for John McGuinness on the Padgetts Honda Superstock machine.

Smart, a British Superbike race winner, tested the team’s ZX10-R during a track-day at Mallory last week. The pair were team mates at Hawk Kawasaki back in 2004.

"I am really looking forward to getting out there again this weekend” said Richards. “I last rode a Superbike in 2011 and that was in Evo, so I think it will be a case of seeing what we can do this weekend. I am going into the weekend with an open mind and myself and Smarty are both going in at the deep end together so at least I am not a lone ranger!

"I really wanted to have a few rides this year, so to be out in Superbike again is exciting, even if it is a bit crazy to come back out straight away into a triple-header at Oulton Park! There is one thing I will say, though, and that is I don't care what happens as long as I beat Smarty!"

"I am excited about the weekend because although I have ridden the bike for a handful of laps recently, I haven't raced since last year, but I suppose a baptism of fire is the best way!” added Smart.  “It isn't going to be easy, but I am looking forward to working with the team and Glen because this year is the tenth anniversary of us being team-mates at Kawasaki in 2004 and that in itself is cool. We both don't want to be beaten by one another, so we will be pushing each other on. I think both myself and Glen are of the belief that if you are going to do something you might as well commit yourself in style and where better than at one of the most challenging circuits on the calendar, Oulton Park!"