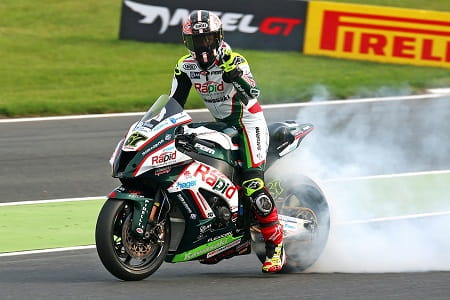 Shane Byrne stormed to a dominant victory in the second race at Brands Hatch to clinch a record fourth British Superbike title, with title rival Ryuichi Kiyonari watching from the sidelines after breaking his collarbone in practice on Saturday morning.

All the Kent man needed was to finish fourth but doubt was cast over whether he’d do it as he found himself outside the top ten in the opening stages in tricky conditions.

With Howie Mainwaring and James Ellison battling for the lead, it didn’t take Byrne long to barge his way past. Despite a couple of attempted passes from Mainwaring, Byrne maintained his lead to secure his fourth title in style.

Ellison and Mainwaring completed the podium. Josh Brookes finished fourth to keep his hopes of taking fourth in the championship alive ahead of Stuart Easton and Tommy Bridewell. Jon Kirkham, James Westmoreland and John Hopkins rounded out the top ten.

Byrne’s title comes after an impressive 22 podiums across the season, including nine victories.