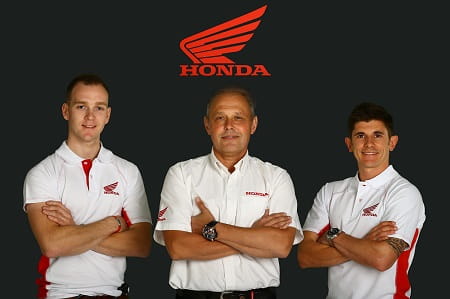 Dan Linfoot and Jason O’Halloran will front Honda Racing’s return to the British Superbike Championship next season. The Louth-based team took a break from the superbike class this year after winning the championship with Alex Lowes in 2013 but will be back in force with their all-new line-up for 2015.

Linfoot enjoyed his best season to date in the British Superbike Championship this year, a strong first half of the season secured him a spot in the title fighters' showdown in which he clinched fifth place overall. The Wetherby rider bagged his first podium at Oulton Park and showed he could run at the front on numerous occasions, challenging eventual champion Shane 'Shakey' Byrne for the lead at both Oulton Park and Thruxton before leading two races in the final round at Brands Hatch.

"I'm extremely happy and grateful to Honda UK for this opportunity, I am going to grab it with both hands" said Linfoot speaking to Bike Social. "Their experience and knowledge is huge, the rest is now down to me. I'm realistic, I've finished 5th in the British Championship this year and I'm now looking forward to working hard with Honda to improve on that next year. I feel with their influence I can blossom to become a more serious title contender.

"The CBR1000RR might not have been racing in British Superbikes this season but it's undergone an extensive testing programme. Honda have consistently produced one of the best technical packages on the grid and I don't see why that should be any different next year. Turn the clock back 12 months and Alex Lowes won the title on it, now it's had a season's further development.

"My aim for 2014 is to imrpove my riding even more, achieving more consistent podiums and only then can we assess our aim for the championship. We know the leaders from this year will be strong again but I think the rest of the grid will be even stronger in 2015. My personal goal is to be British Superbike Champion, whether that happens to be in 2015 or 2020 remains to be seen!"

The Honda Superbike ride is a year overdue for Jason O’Halloran, who’d all-but-signed to ride for the Neil Tuxworth-run squad before the superbike plans were pulled late last year. The Aussie remained faithful to HRC, competing in the Superstock championship aboard Honda’s new Fireblade SP finishing second overall to Danny Buchan.

Honda Racing is the first team to complete their line-up for the 2015 British Superbike Championship.