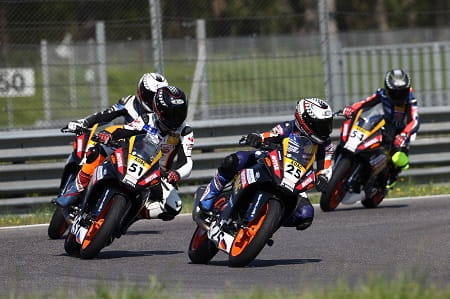 British Superbike bosses are currently in talks with KTM UK about introducing a one make series next season with the Austrian manufacturer’s brand new RC390.

The new series would replace the outgoing Triumph Triple Challenge on the BSB schedule and will be aimed 12-17 year olds with a view of nurturing young racing talent.

KTM revealed the all new RC390 at the 2013 Milan Motorcycle Show also stating their intention to utilise the bike as an affordable way for youngsters to make a name on the racing scene. The German ADAC organisation is currently running a series similar to the one proposed for the British championship, with a grid of over 30 riders battling it out at selected rounds of the German Superbike Championships (IDM).

The RC390 boasts a 375cc single-cylinder four-stroke engine, producing 44bhp, housed in a steel trellis chassis. The Cup version is fitted with track-focused KTM PowerParts which will also be available for sale to the public.

“KTM is a ‘Ready to Race’ company that is also committed to developing future talent, such as with the Red Bull Rookies MotoGP Cup” said KTM UK’s Marketing Manager, Simon Belton. “A UK version of the RC 390 Cup will allow MSVR to provide a very cost effective and competitive youth series along with offering KTM UK a very exciting platform to introduce the production version of the RC 390.

“The intention for this UK series is to follow the rules and formula from the ADAC championship, with details such as age restrictions yet to be set, but likely to be open to riders aged 12-17 years old. Our presence at Oulton Park should hopefully give us the opportunity to talk to potential riders and partners for the series in order to make a full announcement very soon.”