Kiyonari: "The pressure is on for the championship" 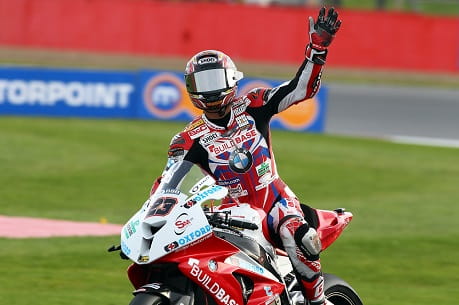 Ryuichi Kiyonari maintained the points gap to Shane Byrne after the weekend’s eleventh round of the British Superbike Championship at Silverstone and now says he’s focused on winning that record fourth title.

Since returning to the top step at Knockhill back in June, Kiyonari has tried his hardest not to draw on questions about winning the title. The BMW rider told Bike Social earlier this year he was only concerned about winning races and wasn’t worrying about the title after a difficult few years.

Byrne narrowly defeated Kiyonari in the first race at Silverstone with a move at Brooklands on the final lap but the 32 year old responded in the second race to match Byrne’s points haul.

“I’m very, very, very happy” said Kiyonari after the second race. “I keep pushing hard, try hard. I concentrated on the lap time every lap, trying to keep tight and block my line on every corner. At the end of the race Shakey was still there and I thought he would try the same move he did in race one so I tried to change my line a bit but still put in a good lap time. I’m very happy to have won. We came close in Assen but missed out and the same here in race one, but not this time.”

“Now the pressure is on for the championship” he admitted. “It’s very close in the points. Last time at Brands I won the first race and DNF in the second. I like Brands, it’s my favourite track but Shakey is very strong there. There’s just one more round so I’m going to give it everything and try and win all three races. I really hope I can win the championship.”

Whoever wins out of Kiyonari and Byrne will be the first ever rider to amass four British Superbike titles. The ‘War for Four’ has well and truly begun.