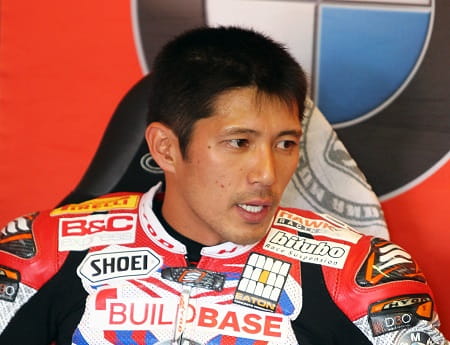 Ryuichi Kiyonari’s chances of taking a fourth British Superbike title took a turn for the worse this morning as the BMW rider crashed out of a wet free practice session suffering a fractured collarbone.

Despite the sun shining and high morning temperatures, the Brands Hatch Grand Prix circuit was wet for the third and final Free Practice session after overnight rain. While some riders, including championship challenger Shane Byrne, remained in the pits for the opening stages, Kiyonari headed straight out on his Buildbase BMW S 1000 RR.

The rear end came round on the Japanese rider on the way out of Graham Hill Bend, throwing him to the floor. Immediately clutching his shoulder, he was taken to the medical centre where it was confirmed he’d suffered an undisplaced fracture of his left collarbone.

Kiyonari trails Shane Byrne in the 2014 British Superbike standings by just 12 points with three races remaining, the first of which scheduled for 15:45 today.

UPDATE: Kiyonari will not participate in qualifying or Race 1, will assess his condition before warm-up tomorrow morning.

Follow @bennetts_bike on Twitter for all the latest news and gossip from the final round of the British Superbike Championship at Brands Hatch.