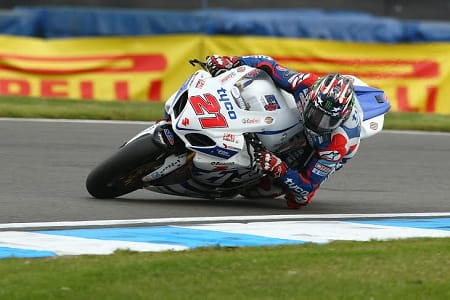 It might be nine rounds in to the season but it would seem that John Hopkins has finally found his form as he takes pole position for tomorrow’s first British Superbike race at Donington Park.

The American has struggled with the Tyco Suzuki upon his return to racing, despite starting the season with a fifth place at Brands Hatch he’s struggled to match the form that saw him fighting for the title with Tommy Hill back in 2011.

Currently sitting tenth in the championship standings, it’s too late for Hopkins to fight for the title this season but his re-found form could interfere with those that are, especially should he take away vital podium credits this weekend.

Hopkins has shown pace all weekend after setting the fastest time in Friday’s second free practice session. The only small blip to his weekend so far has been technical gremlins in final practice meaning he hardly turned a wheel, so should his form continue he could be on for a podium in the race at a circuit where he took the double three years ago.

“It’s great to be on pole position tomorrow” said Hopkins. “I like Donington a lot and enjoy riding here. Fortunately for us it’s not a horsepower circuit, you’ve got to have a good chassis and a lot of confidence in the front as it’s all about momentum and in that respect the Tyco Suzuki is working great.

“We had a bit of an electrical glitch that kept us off track this morning but the team managed to get it all sorted for qualifying this afternoon, the bike felt great and I’m really happy. My aim was to get onto the front two rows so pole position is a bit of a bonus.

“I think we’ve got the race pace, we had a good solid run yesterday afternoon but obviously couldn’t get a run in this morning. Hopefully I’ll be able to get away with the title fighters and see what we can do tomorrow!”