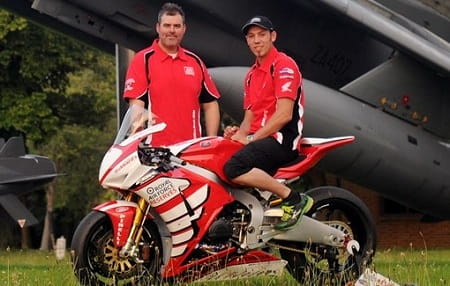 Peter Hickman will return to the British Superbike Championship full-time from Knockhill as he joins forces with the RAF Reserves Honda squad.

Hickman had been without a ride at the start of the season but some eye-opening performances at the North West 200 and Isle of Man TT, where the Louth-based rider stormed to an astonishing 129.104mph lap to become the fastest newcomer in the event’s history, saw Hickman back on British Superbike team shopping lists.

Hickman rode at Snetterton for the Tsingtao Kawasaki outfit after the squad parted ways with Derby’s Jon Kirkham before qualifying, but has chosen to make his full-time comeback with the RAF Reserves Honda squad with youngster Harry Hartley taking on the Tsingtao ZX10-R.

The twenty-five year old has a positive history with Honda in the British series, taking his best result of second place on a Fireblade at Thruxton in 2011.

"I am really happy to be back in the championship as that is what I have been pushing for all season” said Hickman. “I haven't really set myself and expectations as such because this is like the start of the season for me, but I know the Honda which is always a good place to start! I had some good results with Honda before, so I am really looking forward to getting on it this weekend and getting back into it again. Knockhill will be the first test for us but I like to be thrown in at the deep end; I am relaxed about the first races with the team and we are determined to crack on with the job."