Ellison: "I felt I could win the second race" 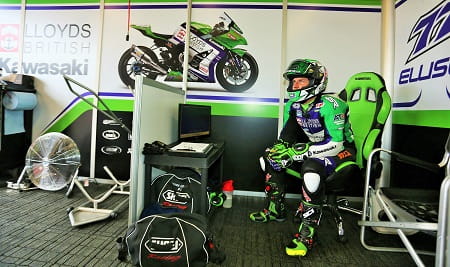 James Ellison has said he is thrilled to be heading into round two of the British Superbike championship in second place in the championship after a double podium at Brands Hatch.

The Kendal man took third in Monday’s first race in an impressive charge from sixteenth on the grid after he fell in the second qualifying session on Sunday. Ellison made strong progress before the race was red flagged, leaving him to line up on the front row for the restart with fresh tyres. Shane Byrne went on to win the race ahead of Ellison’s GBmoto team mate, Chris ‘The Stalker’ Walker.

“I was happy with getting a podium in race one, especially after what happened yesterday with crashing in qualifying and starting sixteenth on the grid” said Ellison, speaking to Bike Social.

“To pull through and get a podium and with Chris ahead of me in second it was just mega, for me and the team.”

Recording the fastest lap in the first race, Ellison started the second thirty-lap battle from pole position and despite a tough start the Cumbrian fought through to catch runaway race leader, Shane Byrne. It had looked as though he had the pace to win but then started to drop off when he couldn’t get past and lost second place to Josh Brookes. 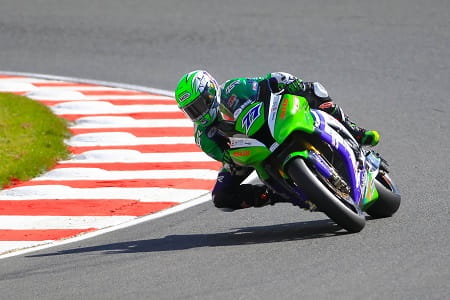 “The disappointing thing was that in the second race I felt I could win it! We started chasing Shakey [Byrne] down and managed to close the gap getting right on his back wheel but then I started losing the front. I didn’t purposely back off I just couldn’t go any quicker.

“Every time I’d go into turn one I’d lose the front and it was the same at clearways and in the end I saw the gap behind closing up and I figured it might be Josh! It’d have been nice to be able to push on that extra bit to make the pass on Shakey but it wasn’t to be. It’s been a good first round; we’re now leaving here second in the championship which is the strongest start I’ve ever had to a British Superbike season so I’m fairly happy. “

Ellison signed for Mark Smith-Halvorsen’s GBmoto Kawasaki for 2014, a move which some called a gamble with the team having never even stood on the British Superbike podium before. With the team leaving Brands Hatch with their riders second and third in the championship, it’d seem Ellison’s gamble may well have paid off.

“I’d done a lot of research on this team before signing, on Mark [Smith-Halvorsen – Team Principal] and Matt Llwellyn my crew chief and I asked them what they were planning to do with the bikes and who they were using to tune the engines etc. Everything ticked the boxes and of course having Chris [Walker] on board as well, with all his knowledge from Kawasaki I figured that would help in testing, which it did as he was quicker than me in every single test! It was a calculated risk but it seems to have paid off!”

The British Superbike paddock now heads to Oulton Park for another bank holiday bash. Pretty much his home round, Ellison has enjoyed much past success at the Cheshire circuit.

“I’ve won at pretty much every British Superbike circuit so there aren’t really any I favour – it all comes down to set-up of the bikes and then the riders on that particular day. You are always going to have your Shakeys and Brookes’ up at the front and fingers crossed Chris and I will be up there as well.”