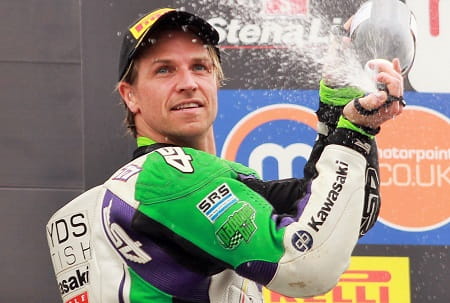 James Ellison could return to action in the British Superbike Championship as soon as the next round at Cadwell Park, according to GBmoto Kawasaki team boss Mark Smith-Halvorsen.

Ellison has been out with a broken femur since falling from his Lloyds British GBmoto Kawasaki at Brands Hatch three rounds ago. After being released from hospital five days after the crash, the Cumbrian has undertaken an extensive recovery programme with the aim of getting back on his bike as soon as possible.

Smith-Halvorsen confirmed to Bike Social this afternoon that the plan is for Ellison to be riding again at one of the two remaining rounds (Cadwell Park or Donington) before the showdown gets underway at Assen in September.

“James is doing really well” explained Smith-Halvorsen. “Since leaving hospital after the accident he’s been really pro-active about his recovery. He’s been travelling over to the Isle of Man for early physiotherapy, massaging and a whole dose of hyperbaric chamber treatment and he’s making really good progress. 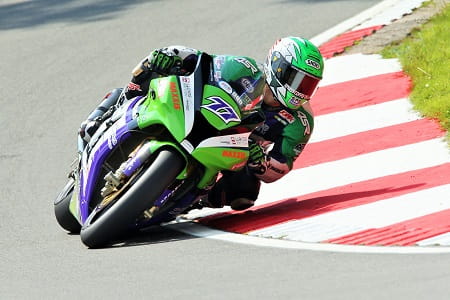 “He’s a lot stronger and together than anybody could believe. It’s almost certain, barring mishaps, that he will be riding in pre-showdown rounds. The big question remains as to whether his recovery can stay on course for him to meet the medical standards to ride at Cadwell, if not we’ll wait until Donington.

“The organisers have made it clear about the condition James would need to be in and what tests he’d need to pass if he’s to ride at Cadwell. If we think he’s going to damage himself or hinder his recovery by taking those tests then we’ll stop him. If he’s in a good enough condition then he’ll take the tests a few days before Cadwell.

“I’m certain that we all agree he’s in the right place and should he pass the tests, he’ll ride and we’ll go from there in practice. The race itself is another matter, the whole event will be difficult for him, Cadwell is tough enough when you’re fit so what he can achieve during that weekend remains to be seen and we won’t be pushing him.”

When asked whether Ellison would have chance to ride a bike prior to Cadwell, the southerner admitted that would be part of the plan.

Ellison currently sits fourth in the championship and with three races this weekend at Oulton Park he’s almost certain to fall down the standings.  A return at Cadwell Park or Donington could help secure his position in the three-round showdown for the title.