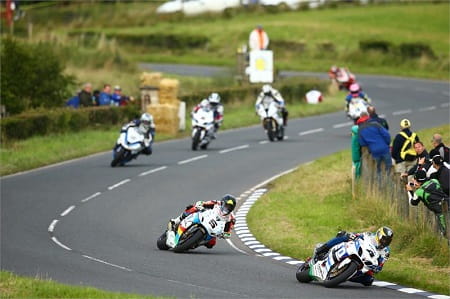 New Zealand’s Bruce Anstey bagged a double victory at the 2014 Ulster Grand Prix this weekend taking the spoils in both the first Superbike and Supersport outings, increasing his overall win tally at the Dundrod circuit to ten victories.

Pace in the Superbike class was dictated by Anstey and Tyco Suzuki rival Guy Martin all week and the racing opened with Martin taking victory in the Dundrod 150 Superbike outing on Thursday night, beating Anstey by just 0.242 sec after a last lap challenge. Michael Dunlop rounded out the podium on Thursday evening’s proceedings.

Shortly after getting underway, the first Supersport race was red flagged after Kneen, Harrison and Keith Amor all crashed out of the race. The trio were taken to hospital with non-life-threatening injuries later confirmed to be numerous fractures.

Upon the restart, Anstey took an early lead on the Valvoline Padgetts Racing CBR600RR before being taken by Tyco Suzuki’s William Dunlop at mid-race distance. However, victory wasn’t meant to be for the Ulsterman whose GSXR600 blew up on the final lap leaving Anstey to cross the line to take his first victory of the day ahead of Lee Johnston and Guy Martin. 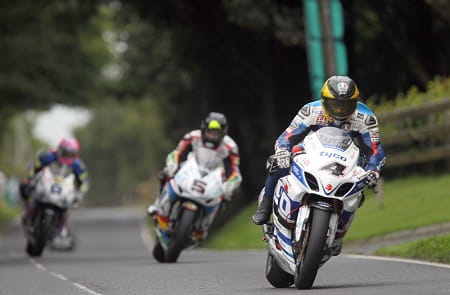 The first Superbike race turned into a corker with Guy Martin taking the lead in the early stages with just two covering the Lincolnshireman and pursuing rivals Bruce Anstey, Lee Johnston. Anstey took the lead from Martin on the sixth lap but lost out to the Tyco Suzuki man and Lee Johnston shortly afterwards due to a mistake. Recovering nicely, Anstey re-took the lead half way round the final lap to cross the line almost three tenths ahead of Martin with Johnston dropping off in the closing stages.

The second Supersport race got underway in dubious conditions before being red flagged following Bruce Anstey, Ian Hutchinson, Steve Mercer and Michael Sweeney crashing at high speed at Deers Leap. Following lengthy delays and worsening weather, the re-run was eventually abandoned as was the running of the second superbike outing.

Ivan Lintin took victory in the day’s Supertwins race with James Cowton winning the Lightweight on his Yamaha 250 while Daley Mathison took the spoils in the Ultra Lightweight class.