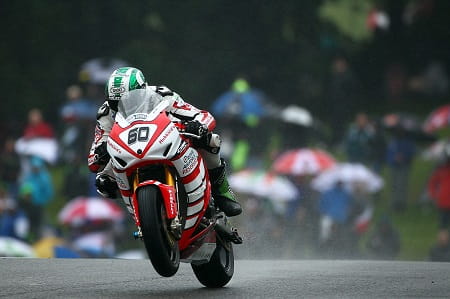 After a short delay to allow an iffy weather front to pass the first British Superbike race got underway in largely dry conditions.

Shane Byrne took the holeshot ahead of GBmoto’s Chris Walker while a rapid start from Halsall Biker Gear Kawasaki’s Jon Kirkham saw the Derbyshire man shoot into third ahead of Josh Waters.

Ryuichi Kiyonari went through on Kirkham into the mountain section before moving on to take second from Chris Walker at the end of Park Straight the following lap before then surpassing Shane Byrne for the lead. Byrne took Kiyonari back before the Japanese man hit problems on the sixth lap forcing him to retire from the race.

Following Kiyonari’s departure, Byrne was chased by Milwaukee Yamaha’s Tommy Bridewell. But as the rain started to fall lap times slowed and the leading pack closed up. Bridewell took the lead from Byrne into Park Corner on the seventh lap but Byrne returned the favour a lap later. Chris Walker sat in third just ahead of rain man Josh Waters and RAF Reserves Honda’s Peter Hickman.

Josh Brookes started to progress through the pack on lap nine, passing Hickman and Waters to move up to fourth position.

A missed gear for Byrne at Barn saw Bridewell take the lead into the eleventh lap. Getting a stronger drive, Byrne dived underneath the Yamaha at turn one but with rain now falling heavily, riders stuck their hands up for the race to be stopped. 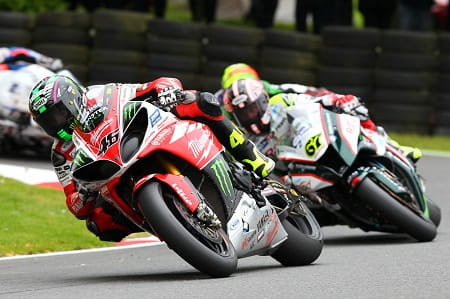 With the result being taken back to the tenth lap, Bridewell  took his debut British Superbike victory by 0.005 seconds ahead of Shane Byrne and Chris Walker. Josh Brookes salvaged fourth from a poor grid position ahead of Josh Waters, who collided with 8th placed Jon Kirkham on the aborted lap. Peter Hickman took a season-best sixth place ahead of showdown contender Dan Linfoot. Stuart Easton and old boy Glen Richards completed the top ten.

Conditions had worsened for the second race and it was once again Shane Byrne who took the lead ahead of RAF Reserves Honda’s Peter Hickman, who stole the lead off Byrne at the start of the race. Looking comfortable at his home circuit, the tall Lincolnshireman lead Byrne ahead of Bridewell and Waters. After a crash on the warm up lap, Josh Brookes was black-flagged and disqualified from the race with the rules stating riders cannot continue in a session after falling from their machines.

Kiyonari passed Bridewell for third on the fourth lap, as he set off after championship rival Shane Byrne but drama struck just a lap later as he was catapulted from his Buildbase BMW S 1000 RR between the hairpin and Barn.

Tsingtao Kawasaki’s Gary Mason progressed through the pack to take fifth place on the seventh lap ahead of Glen Richards and Dan Linfoot.

Byrne upped the pace at mid-distance to close in the CBR1000RR of Hickman but the fastest ever Isle of Man TT newcomer responded to the Kawasaki’s challenge. Mason caught Josh Waters for fourth place on the eleventh lap, slipping past the Aussie through Chris Curve.

Jon Kirkham slipped past Glen Richards for sixth on the penultimate lap. Hickman eventually crossed the line to take his debut British Superbike victory by over two seconds from Shane Byrne, Bridewell ended a positive day with a strong third position ahead of a valiant fourth for Gary Mason.

Waters took fourth after the nasty race one crash.