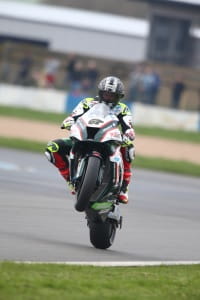 Around two thousand fans packed into the paddock of Donington Park yesterday as the sun shone over the first British Superbike test of the season on UK soil. Many competitors did not head out in the morning sessions with the track damp after overnight rain, but the cloudy conditions gave way to sunshine at lunchtime seeing all British Superbike contenders out in the final session.

It was Rapid Solicitor’s Kawasaki’s Shane Byrne who topped the timesheets after a stunning lap in the closing minutes of the final session. The three-time champion was under lap-record pace as he was spurred on by Josh Brookes on the Milwaukee Yamaha. Brookes had led the timings for most of the day before being edged out by the Kawasaki man.

There are positive signs for Ducati and the 1199 Panigale as Jakub Smrz set the third fastest time with Chris ‘the Stalker’ Walker fourth, just eight tenths off Byrne’s pace. James Westmoreland led the BMW charge in fifth ahead of Tommy Bridewell and Stuart Easton. Series returnee, John Hopkins set the eighth fastest time ahead of Ryuichi Kiyonari on the second Buildbase BMW. James Ellison’s GBmoto Kawasaki rounded out the top ten.

The lunchtime session was red flagged as Howie Mainwaring suffered a braking issue into the first corner. The Quattro Kawasaki rider walked away from the accident unscathed, although the same couldn’t be said for his ZX10-R.

A further pre-season test will be held at Snetterton on 8-9 April ahead of the first round of the season at Brands Hatch in just over two weeks’ time.