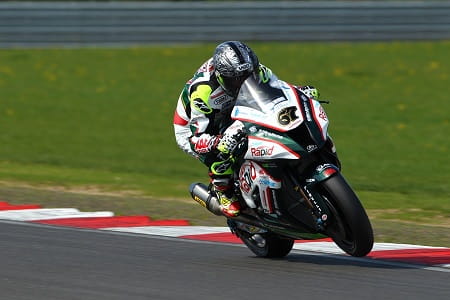 The final pre-season test for British Superbike racers got underway at Snetterton on Tuesday, with the weather unfortunately not as kind as it had been a week previous at Donington Park. Bitterly cold and windy in the morning, few riders ventured out onto the circuit. Only a little warmer in the afternoon, most riders made the most of the time they had on track.

Fortunately for the second day of the test, the sun came out and riders were able to use the time at the Norfolk circuit to their full advantage. Three-time British champion, Shane Byrne topped the timesheets once again shattering the existing circuit lap record despite an engine blow-up earlier in the day.

At Donington Park last week, only Josh Brookes had managed to get anywhere near the Kent man and with Brookes’ Milwaukee Yamaha team opting to skip testing in Snetterton, the gap to second place was over half a second.

It was Jakub Smrz in that second place, the Czech rider having found some welcomed pace on the Millsport Ducati Panigale. Smrz’ time was some seven tenths off Byrne but much closer to the front than a Ducati has been in quite some time. 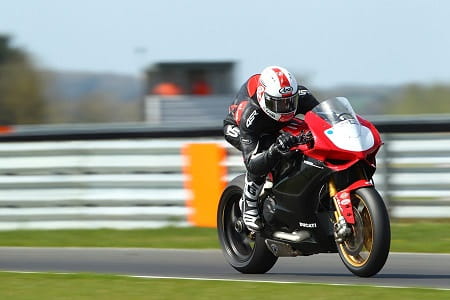 Third on the timesheets was BSB veteran Chris Walker, just under a second off the pace set by Byrne. Walker seems to have gelled comfortably with the GBmoto Kawasaki team as he looks to set aside his technical gremlins of 2013.

Julian Da Costa set the fourth fastest time on Alex Lowes’ championship winning Fireblade. Honda won’t be competing in the championship full-time this season but are keen to continue the development of their CBR1000RR Superbike in readiness for their 2015 return. American John Hopkins set the fifth fastest time on the Tyco Suzuki ahead of the second GBmoto Kawasaki of James Ellison.

A further pair of Kawasaki followed in the form of Dan Linfoot and Stuart Easton with Ryuichi Kiyonari (who had a small tumble on Wednesday afternoon) and James Westmoreland on the BMW rounding out the top ten.

With fifty bikes out in each session, the test was awash with red flags with organisers airing on the side of caution for even smaller incidents. Jon Kirkham wrote off his Tsingtao Kawasaki ZX10-R on the first day and did not participate any further in the test and neither did Quattro Plant Kawasaki’s Howie Mainwaring, who dislocated his collarbone in a day one crash. Mainwaring was transported to hospital where the collarbone was put back into place under a general anaesthetic. The Kent-based rider is set to miss the first round of the championship next weekend at Brands Hatch and is also in doubt for round two at Oulton.

With pre-season testing now over, the British Superbike paddock will assemble at Brands Hatch next weekend for the opening round.