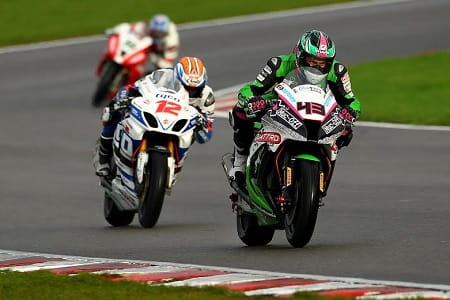 The drama of this weekend’s British Superbike championship finale continued this afternoon as Shane Byrne crashed out of a wet first race, which was eventually won by first time victor Howie Mainwaring on the Quattro Plant Kawasaki.

Conditions prior to the race were tricky with the circuit not having completely dried from overnight rain but the heavens opened on the grid, soaking the circuit and leaving no difficulty whatsoever when it came to tyre choice.

It was Shane Byrne first into paddock hill bend with Josh Brookes and James Ellison close behind. Dan Linfoot took third from Ellison on the second lap and immediately began to look for a way round Brookes’ Yamaha. Having passed Brookes coming into the third lap, the North Yorkshireman took the lead from Byrne at paddock hill.

Rain man Josh Waters was soon on the move, taking sixth position into Druids on lap four before displacing Halsall Kawasaki’s Jon Kirkham for 5th at Surtees. Setting the fastest lap of the race, Waters moved into third on lap seven and began to stalk the second-placed Shane Byrne.

Drama struck at the end of the eighth lap as the rear came round on Shane Byrne’s Rapid Solicitors Kawasaki, wiping him out of the race. With title rival Ryuichi Kiyonari out of the race with a broken collarbone, Byrne’s fall would mean the points gap would remain untouched giving Kiyonari half a chance should he return to action tomorrow.

The leading trio was now in the order of Dan Linfoot, Jon Kirkham and Tommy Bridewell with Waters, who had been held up by Byrne’s incident, in fourth. The Aussie soon fought back through, taking Kirkham for second at the end of the back straight on the ninth lap.

Meanwhile the fastest man on track, Howie Mainwaring, continued to progress through the field, taking third position on the eleventh lap. The Quattro Plant Kawasaki rider overtook his team mate, Linfoot, on lap twelve before pushing for a gap.

Off line into Druids, Linfoot lost second to Waters on lap fifteen, with the Kawasaki man then also losing out to Jon Kirkham.

At the front, Waters latched himself onto the rear wheel of Mainwaring, but struggled to find a way past. The duo came into clearways side by side on the last lap but a small moment for Waters put pay to his chances of a third British Superbike win.

The gap between Byrne and Kiyonari in the title chase remains at 12 points, with Kiyo set to decide whether to ride in the morning.