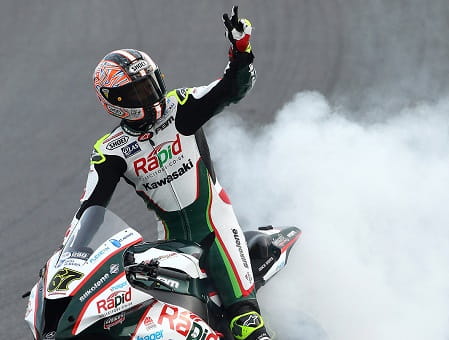 Shane Byrne has stormed to double victory today in front of his home crowd today at Brands Hatch, despite a tough time on Saturday, falling in both the free practice and qualifying sessions. The three time champ didn’t let his poor grid position deter him from getting to the front, as he commanded both races to take two all-important victories in his 2014 title challenge.

There was drama from the off in race one as Ryuichi Kiyonari stalled his BMW on the front row, fortunately the Japanese rider was avoided by the other competitors and managed to get away. Chris ‘the Stalker’ Walker took the early lead, before being passed by Josh Brookes into paddock hill bend but then drama struck as the Australian tucked the front coming into Druids. This left Walker a comfortable buffer ahead of the rest of the pack, as he continued to push on looking for his first British Superbike win since Oulton Park in 2012.

Shane Byrne had other ideas though, fighting through the pack from thirteenth on the grid. The determined Kent-man grabbed second place by lap ten and began to chase down the Stalker. James Hillier’s Quattro Plant Kawasaki blew up on the home straight bringing out the red flag on lap eighteen, meaning the race would need to be re-started for a result to be declared.

Starting on pole for the restart, Walker took the early lead with Shakey in tow and despite the forty-something year old’s best efforts to hold off the three-time champ, the Rapid Solicitors Kawasaki man took the lead on lap two and didn’t look back. 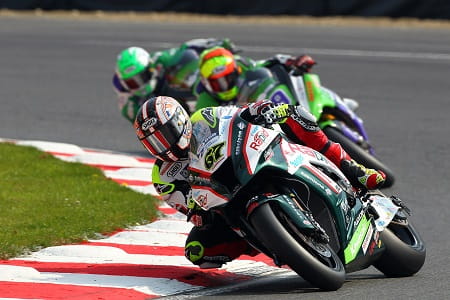 Walker rode a strong race for second place, fending off his GBmoto team mate James Ellison towards the end, completing a Kawasaki whitewash of the podium. Ben Wilson, also on a Kawasaki, took an impressive fourth on his BSB debut with John Hopkins rounding out the top five. James Ellison set the fastest lap of the race securing pole position for the second outing.

Poor starts for the GBmoto boys saw Shane Byrne and Stuart Easton dart into the lead of the second round. Determined to take the double, Byrne bolted from the off looking to build a gap while Walker and Ellison struggled to pass the second Rapid Solicitors Kawasaki of Easton.

It was Ellison who broke the Scotsman, taking second place and catching up with Shane Byrne although the Cumbrian didn’t quite get close enough to mount a challenge. Meanwhile Josh Brookes, who started from tenth place, was fighting through the pack setting consistently faster lap times than his rivals. Brookes, followed closely by BMW’s Ryuichi Kiyonari fought their way into the leading pack to form a twelve-wheeled battle for the lead. Brookes managed to get into second with four laps to go, putting pressure on Byrne towards the end of the race. Brookes lost out on the penultimate lap as he got stuck behind backmarker Peter Baker, and despite his best efforts he couldn’t reel in Byrne on the last lap of the race. 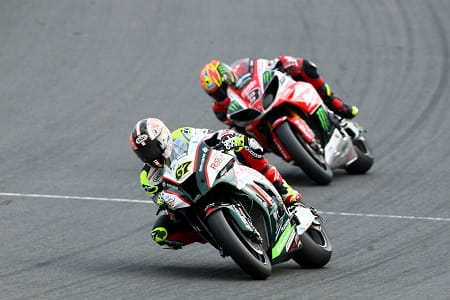 Ellison completed the podium ahead of a jubilant Ryuichi Kiyonari, Chris Walker and Stuart Easton. Shane Byrne now leads the championship ahead of James Ellison and Chris Walker.