Brookes back on top with Thruxton double 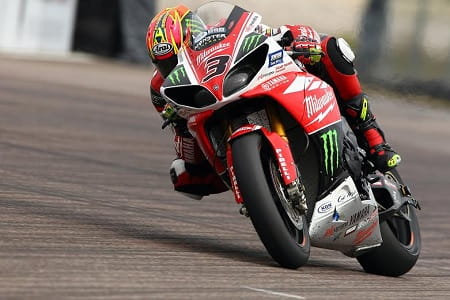 Josh Brookes catapulted himself back into contention for the British Superbike title with two faultless rides at Thruxton to take the double ahead of championship rivals Shane Byrne and Ryuichi Kiyonari.

A shocking start for polesitter Jakub Smrz on the Millsport Ducati saw fellow front row sitters Josh Brookes and Dan Linfoot shoot into the first corner ahead in the first race. It was Linfoot who took the lead ahead of Brookes with Shane Byrne in third from the second row.

Across the stripe for lap two Linfoot still lead Brookes and Byrne with Rutter, Hopkins and Walker in tow. Hopkins soon fell back with the battle for fourth turning into a scrap between the oldies, Rutter and Walker.

Jakub Smrz’ race start from bad to worse as he cut the chicane on the third lap, leading to a stewards investigation. Bridewell, Kiyonari, Smrz and Hopkins soon joined the rear end of the battle for fourth, with a freight train back to Jon Kirkham in thirteenth position behind.

After looking for a way around Linfoot for a good few laps, Brookes finally made his move on lap seven into the chicane. The Aussie bolted as soon as he’d got into the lead, keen to make a point after two tough rounds at Knockhill and Brands.

Linfoot lost second to Byrne two laps later but surprisingly hung on to his fellow Kawasaki man. With his hard tyre coming into its own, Kiyonari shot into fourth and set his sights on chasing down the leading pack.

Despite a moment on lap 16, Kiyonari reduced a gap of over one second to find himself right on the back of Dan Linfoot within a lap. He took third from the Wetherby man on lap 18 before forcing his way ahead of Byrne at the start of the final lap. Byrne was looking for a way around the BMW rider for the whole lap, finally making a hard move into the chicane to get the better of his rival.

Homeboy Tommy Bridewell finished fifth ahead of Jakub Smrz with Walker, Hopkins, Rutter and Muff rounding out the top ten. 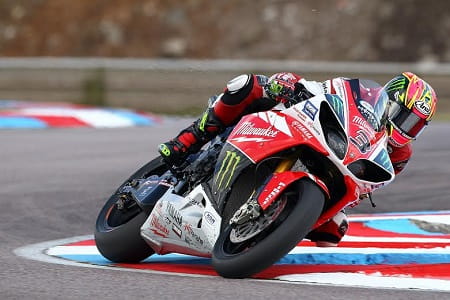 A rapid start from Byrne saw the PBM Kawasaki dart into the lead at the start of the second race with Linfoot in tow. Brookes, keen not to waste any time, shot past Linfoot into turn three but couldn’t make it stick.

Sensing his opportunity, Linfoot shot into the lead down the hill but the more experienced Byrne came back on him into the chicane. A cracking move by Linfoot into the first corner saw the Wetherby man re-take the lead on lap four but once again the Rapid Solicitors Kawasaki stuffed it up the inside into the chicane as behind them Kiyonari shot into fourth ahead of Chris Walker.

A technical issue for Tommy Bridewell saw the Devizes rider pull over but having already dumped oil on the circuit, the safety car was brought out. When it became obvious the contamination wouldn’t be dealt with quickly the red flag was drawn.

Byrne started on pole for the fifteen lap restart ahead of Linfoot and Brookes, with Kiyonari, Hickman and Walker on the front row.

Another cracking start from Byrne saw him take the lead once again from Dan Linfoot. A stronger start for Walker from the second row saw the veteran take third ahead of Brookes but the Aussie regained the position into the start of the second lap. Keen for podium credits, Walker returned the favour into the club chicane next time round, pushing the Milwaukee Yamaha down to fourth once again.

On fire, Walker shot round the outside of Linfoot into the chicane on the following lap as Kiyonari made ground on Josh Brookes, pushing the Aussie out wide to take fourth ahead of the fifth lap. A mistake saw Kiyonari lose quite a bit of time as Brookes decided it was time for revenge after being battered about early on. The Aussie took both Linfoot and Walker into the chicane on the sixth lap before taking the lead from Shakey at turn two.

Brookes, Byrne and Linfoot started to break away from the battle for fourth between Walker and Kiyonari but keen not to lose out on any podium credits, the BMW man set the fastest lap of the race on lap nine as he looked to chase down the leading trio.

Kiyonari slipped past into third cleanly into the chicane on lap eleven as further back, Jon Kirkham got the better of Peter Hickman for sixth position. In a repeat of his late surge in race one, Kiyonari latched onto the back of Byrne as he looked for a way round the Kawasaki.

As tight as you like coming into the final lap, Byrne and Kiyonari hung onto the back of Brookes, who was trying his best to stretch a gap. Byrne runs slightly wide into the final chicane but pulls it back as Brookes crosses the line to take the double with Kiyonari in third.

Dan Linfoot crossed the line to take his second fourth placed finish of the day ahead of fellow Kawasaki men Chris Walker and Jon Kirkham with Stuart Easton slipping into seventh ahead of John Hopkins and Howie Mainwairing on the last lap. Peter Hickman, who had run in sixth place early on, ended up battered back to tenth place.

Byrnes championship lead has now been reduced to 82 points as Dan Linfoot’s strong weekend sees him catapult back into showdown contention.