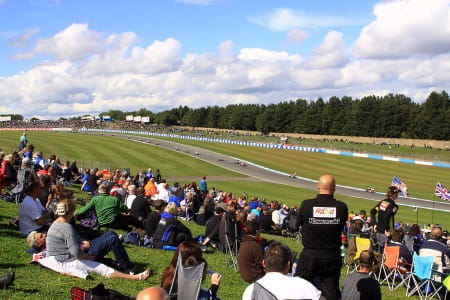 The British Superbike Championship rolls into Donington Park tomorrow for the first of two official, UK tests ahead of the season getting underway at Brands Hatch in just under four weeks time.

The one day test at the East Midlands circuit marks the first time the 2014 competitors all will meet on track after a number of private tests across Spain and the UK throughout March. A majority of British Superbike’s thirty-one strong grid will present at the test, which is open to the public, in order to finalise preparations for the 2014 season.

While testing is testing, the official tests being held at Donington and Snetterton over the next two weeks could give an early indication as to who will be fast from the off come Brands Hatch.

Early championship favourite, Shane Byrne comes to Donington off the back of a successful test at Almeria in southern Spain last week. After losing out on the title at the final round last year, Byrne will be keen to make the most of the revised podium credits system early in the season while his closest competitors get used to their new machines.

Of those set to be challenging Byrne this year, the Milwaukee Yamaha team has to be clear favourites. Shaun Muir has pulled together a strong line-up of Josh Brookes and Tommy Bridewell for the season ahead, with both riders looking at ease on the Yamaha R1 during testing out in Spain earlier this month. Bridewell has the upper hand having already spent two rounds aboard the bike at the end of last season and like Byrne, he’ll be looking to use this advantage early on to put him in good stead of the title chase. Changing manufacturer hasn’t fazed Brookes before, with the Aussie having been in the three-round showdown in each of the four years it has existed.

After losing out in the closest British Superbike title decider to date back in 2011, John Hopkins returns for 2014 and Donington Park will mark the first time UK fans will be able to see the former MotoGP star back on track since he took eighteen months out of racing. The Anglo-American wasn’t too far off the pace of Milwaukee Yamaha during testing at Cartagena and nor was his team mate, twice-Aussie Superbike champion, Josh Waters.

2013 title contender, James Ellison will be looking for a fresh attack on the GBmoto Kawasaki. The Cumbrian got his first taste of the ZX10-R last week in Spain and is now looking forward to getting some track time in the UK alongside teammate Chris Walker.

For some teams, such as the newly-revealed Bathams BMW squad, Donington will mark the first testing opportunity for the 2014 season while others, such as Buildbase BMW and Halsall Kawasaki have only had brief shakedown tests in the UK ahead of Donington Park.

The test will also include track time for the Supersport class, both Superstock categories and riders from the Triumph Triple Challenge and Ducati TriOptions 899 Cup. There will be a pit walk during the lunch hour for fans to meet their favourite riders and get chance to see the 200bhp Superbikes first hand!